If there was any doubt remaining about the state of my sanity...

Here's me after the 20-miler. Note the smile and the fact that I'm not sacked out on the bed. 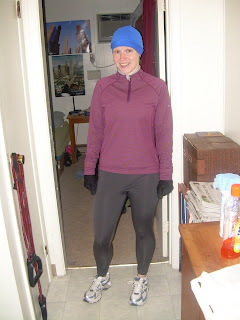 Exhibit B: The ice bath. Now, I've read that once you get under a certain temperature, it's really no more beneficial to go any colder. So, ice bath may be stretching it. But, do you see those little ice cubes floating around? They are keeping the water cold for the full 20 minutes. So I still get to call it an ice bath instead of a cold bath. I win! The book I'm currently reading is borrowed, so I decided not to risk holding it over all that water (that would just be inviting it to fall in) so I picked up Once a Runner instead. Haven't read it in a while. Might again (if I don't care about it falling, it invariably won't happen). Besides that, I have my trusty glass of chocolate milk (nectar of the gods, I'm telling you). Out of the picture is a space heater which is blasting nearby. Yeah, it was just under 40 degrees when I started (felt about freezing), and about 41 at the end. It was SO. HARD. to get into that bathtub but it is also SO. WORTH IT.

So anyway, the 20-miler was officially 20.72 miles and it went perfectly. It didn't hurt that it was cold, although that did make for a somewhat uncomfortable three and a half hours. This is officially my longest training run, and I clocked 3:30:34, for a pace of 10:10 per mile, which is about 1:10 off my projected marathon pace. I had water every few miles (two bottles stashed strategically) and a Gu at miles 10 and 15. I basically didn't feel like I needed them that badly. I am just boggled by how much better this run was than the last two long runs. Of course I was starting to get sore and there was tightness in the quads, but all things considered, I felt great the whole time. I felt like I could have kept going (hopefully another 5.5 miles or so). My pace was good and guess what? Negative splits! By about three minutes or so.

I can't begin to tell you how much better and more confident I feel about the marathon (now just seven short weeks away). My feet are a bit tender, but I'm having very little joint pain (usually after 20 I'm feeling it in the knees and hips). I know I'll be sore tomorrow, but hopefully after that ice bath and chocolate milk, not to mention protein-packed salmon salad sammiches and yummy brown rice for dinner tonight, it won't be too bad.

They managed to get a few pictures of me in the Papa John's 10-Miler last weekend. Here they are, if anyone is interested. Not the best but not the worst. My favorite part is my expression in the two stadium pictures, like I'm in tears. But really I'm having fun! Seriously! Oh yeah, that insanity thing...

Great job on the 20 mile run and in the colder temperatures is even more of an acomplishment. 20 minutes in the ice bath? You are a trooper. I wimp out after 10 minutes.