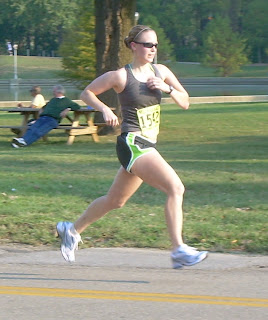 This was a great race in Columbus, IN. I've never really been there, except to go through on the way between Bloomington and Louisville. I was very impressed with the race overall. The only probably was that the last couple of miles of the 5K and the 15K were on the same stretch, a narrow park path. There was a bit of dodging involved, but not a big deal.

The plan was to go out around 8-8:10/mile and hold that as long as I could. The first mile was way too fast at 7:31, but the rest were in good range except for the last two. My overall pace was 8:11, for 1:16:19. According to Mark, I was 9th overall among women. It wasn't a huge race, but it was good-sized, so I'm pretty excited about it. I feel much better about the coming marathon. Time to celebrate!!

I was going so fast that I was blurry! :-P 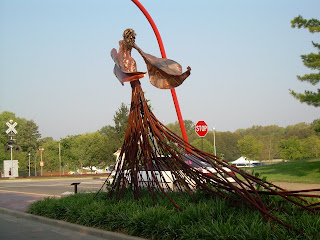 This was a sculpture near the finish line that I just really liked. You can't really tell from this picture, but there are flowers twined all along the tendrils of the lady's train.
Posted by Mir at 9/22/2007 02:41:00 PM

Nice job Mir!! great splits and you look great!! You have inspired me to use one of my race photos. congratulations on a good race you really stayed focus

Congratulations, Mir. What an awesome race! Way to pull off that new PR. You rock!

Nice job! A PR is always very nice. Sounds like you have a nice head of steam going into your marathon. Keep it rolling!

Congrats on the new PR. That's a nice effort. I ran that race two years ago (a couple minutes slower than you just ran it).

It's a nice race. I should really try to make it over next year.

Congradualtions on the PR! It always feels good to run fast and break a personal record after tons of LSD training for a marathon. Good luck at the upcomming marathon. Under 4 hours your goal?

Whoo hoo! Sweet PR! You really ran a fast pace, and sounds like you were pretty consistant. Great job on the big PR! You should be feeling sooo good about your upcoming marathon!

I love that first pic. of you! It's hard to get a pic that really looks like RUNNING, but you nailed it! I'd frame that one! :)

awesome job on the race!!!!

good luck with your 5k on Saturday!!!have fun