So. I swear this was to be just a fun run for me. I registered on a whim just a few days before, and I'm still less than a month post-marathon. Although I had never run this particular race, I'm familiar with the area and knew it would be a hilly bugger. Besides that, we went out with friends on Thursday night and got less sleep than is optimal, then drove home Friday night, staying up late again to talk wedding plans with the parents. In conclusion, when the alarm went off at 6:15 a.m. yesterday, the last thought on my mind was going for a PR.

I invited my parents to come along and participate in the 3-mile walk. They've both talked of trying out a walk before, but never tried it, and I thought this would be a good opportunity. In the end, they did decide to come along, although we were running a bit late. Upon arrival at Huber's Family Farm, where the run was held, I found that they had not received my registration form! I had sent it a bit late, but I thought still in time to arrive by Friday. The organizers graciously allowed me to fill out my information and sign the waiver on the spot, just writing "check incoming" on the form. I do hope if the check was actually lost somehow, that they will let me know so I can mail another. Anyway, it took a while to get this all figured out, then I had to stand in line at the prereg table (they had a larger-than-expected turnout).

In short, I didn't have time to warm up. As we came out of the barn, they were announcing five minutes to go and asking all participants to report to the start. Shoot. Now I had a real quandary. For when we were inside the barn, we caught a glimpse of the age-group awards. They were beautiful hand-made ceramic mugs. I really wanted one, but this is a decent-sized race. I would have to run hard to have a chance at one, but with no warm-up?

I lined up and off we went. No major hills in that first mile, and a fair amount of downhill. I looked down and was shocked to see 7:01 for the first mile. But I still felt good. I started working on reeling people in, imagining that each female I passed could be the difference between one of those mugs. I did slow down a bit after that, once the hills really set in, but I somehow stayed consistent in the 7:20-7:30 range until mile 5, when a steep hill simply kicked my ass. I struggled up that one, but rallied and finished strong. I actually passed three people who were walking, including one female. Someone yelled that I was 13th female with less than a half mile to go. I tried, but could not catch the lady in front of me.

Right after I finished, I spotted Tracy, whom I'd never actually met in person, and said hi to her. It was just a matter of time. :) Mark finished soon after me and we went to get some food and water (oh, heavenly strawberries). Then we went to stand near the finish line to watch for Mom and Dad, and saw Tracy again. As it turned out, the lady who I'd been chasing for the last mile was her friend (I am now completely blanking on her name even though we were introduced, I suck!!). Tracy had been telling her about meeting me in person, and that I'd signed up for this race at the last moment and just gotten engaged. She realized that she had been searching for information on the course today and had read a blog entry written by a girl who had signed up at the last moment and just gotten engaged. Ha! What a coincidence. 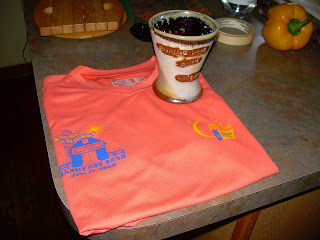 ***
So, I've been tagged by at least three people to complete this meme, so without further ado:

How would you describe your running 10 years ago?
This would have been the summer heading into my junior year of high school, a turning point in my running life. Along with a particularly dedicated cross country team, I started training more regularly and also kept a log for the first time. We worked really hard that summer and it paid off with a trip to the state finals in cross country. On the personal side, it showed me that I really could improve and do better than I'd ever thought possible if I was willing to put the work in.

What is your best and worst run/race experience?
Describing the best is hard because I've had a lot of good races lately. But I'll reach back to high school and describe my race at cross country semi-state, senior year. I was coming off a 30-second PR at regionals. I ran another 30-second PR, 17:02 for 4K, and as fifth runner, helped get our team to state again (this time without the state champion on our team). But right up there are the half and full marathons I ran this spring season. Rarely have I felt so euphoric!

As for the worst, I would have to say the Country Music Marathon in 2006. I hated that race; it was hot, windy, hilly, and the last 10K made me want to shoot myself because it's an out and back. I wanted to turn around early or else lay down and hope someone would carry me back to the finish. I'm not even sure why I had such a bad race. But luckily the rest of the weekend was really fun!

Why do you run?
Running makes me feel good. It's a multitude of different goods. Sometimes I simply feel euphoric, the classic runner's high. Other times I feel immensely satisfied and content with a particular performance (this never lasts long however). There are times when it just feels good to be moving and to feel the wind on your face and rushing by your ears, to coast down a hill. There's the social aspect when running with a group. There's the cathartic time to yourself that running can afford. There are the moments of great beauty that you sometimes see while on the run, the mountain view or maybe just a few rays of sunlight peaking through the branches of a tree. And, of course, sometimes it just feels good to be done!

What is the best or worst piece of advice you’ve been given about running?
This is hard for me to answer because I've received so much good advice from coaches and running friends, as well as online on the RWOL forums. I would say the most important advice has been not to be afraid of higher mileage, but to respect it by building up gradually, knowing when to stop and not being afraid to rest when it's needed.

Tell us something surprising about yourself that not many people would know.
I am generally calm around creepie-crawlies. Spiders, bugs, snakes, etc. might make me jump if I'm startled, and I'm certainly not going to "make friends" with them, but they don't cause my heartrate to go up significantly or anything. But bees? I am terrified of them. I will literally get up and run away if a bee comes near me. I am unable to relax if one is within sight or earshot, and if it gets too close I start freaking out. I mean, I know snakes and bugs can bite too, but they generally stay put and don't attack you like mini-kamikazes of pain.

awesome PR Miranda that is oustanding and what a way for it to come!!! you rock. Congratulations and thank you for answering the tag and sharing.

Perhaps you should have Mark run just behind you a bit with a cage of bees to help you to your next PR....

Great Job. I missed this year's Barnyard because of work travel. It's hilly, but for some reason I ran well on it last year. Maybe it's just the atmosphere surrounding the race.

The lovely Heather Levinson, one of the best people I know, is the missing name. =D Not in your age group, though! Speaking of, apparently I have one of those pretty mugs, too, but she has it. I didn't seem them before, but now that I've seen yours I want mine!

I need post my race report today, but I will agree in advance that the last hill was a butt-kicker.

Congratulations! I just caught up and read your previous post- congrats on your engagement. :) How sweet! :)

Way to follow it up with a smokin' 10k race. This is your week.

This is getting tiresome but GREAT JOB (again)! ;)

I can't believe you got 2nd with that time. Someone must have been really smokin out there to beat you!

This is your year.

great pr! sometimes the best results come when we don't expect them and our mind is not focused on the result but the journey.

Very well done!! For some reason, its funny how a good run can sneak up on you when you are not expecting it.

Wow! Another PR; it's great to hear how well things are going for you now.

wow - great job on the PR! I saw on the RW discussion board that you are thinking about doing the new downtown Indy marathon - I'm hoping to add this on my calendar for 2009!

This is late but CONGRATS on the PR & the engagement!!! Oh, and I'm thinking about running the Indy Monument Half Marathon :) My friend, Pumpkin, (on RWOL) & I were thinking of running it. Only bad thing is it's 3 weeks after Steamtown then one week after Marine Corps.

You got hardware and a PR. You are an animal!!! It felt like you were getting your ass kicked because you were running so hard. GREAT job!