A compostin' we will go.

Composting is something I've always wanted to do, but just never felt like I had the space or means to do so. (Now that I've done a lot more research, I'm well aware I could easily have done a small-time operation on my apartment deck. Oops.) But, better late than never, as they say.

I've read numerous tutorials about using recycled materials to build your own compost bin, as well as window-shopped online for the "deluxe" models. Finally I just decided to jump in the middle--today we bought a 34-gallon plastic Rubbermaid bin at Target for $9.99. Mark drilled some holes in the bottom, sides, and top, and I dumped in some dirt, a mixture of brown and green leaves, and some eggshells as our first kitchen contribution. Voila: 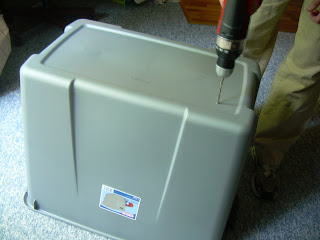 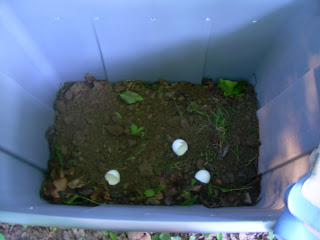 Then I crushed up the eggshells (the smaller the pieces are, the faster and easier they break down), and mixed it all together. Then I popped the lid on. As the bin gets fuller, I'll probably have to use a small spade to keep it mixed, but for now a small garden fork does nicely.

We don't produce very much trash (most things can be recycled, especially now that Bloomington takes 3-7 plastics), and we're hoping this will cut down on our waste even more, not to mention produce some free "black gold" for the garden.
Posted by Unknown at 6/25/2010 10:13:00 PM