Now, I promise I won't update every time we do a bit of yard work, but we were pretty pleased with ourselves after making our giant tree-pile into manageable chunks that the city garbage service can collect tomorrow morning. Here's what it looked like on Saturday afternoon: 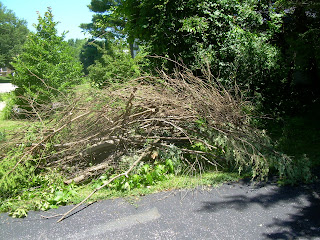 We're not quiiiite done because we ran out of yard bags. But here it is now, quaking in fear from me and my saw of destruction: 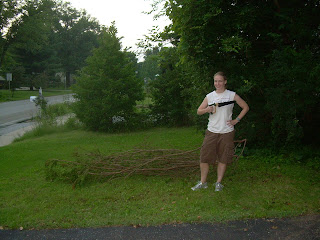 I have to admit it was some nice therapy to break up all those tree limbs, very nice for working through some IRS-related rage issues. Mark was happy enough to actually strike a funny pose as well. 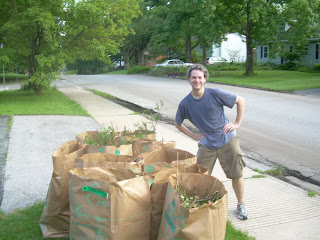 After years of apartment living, I still find it faintly miraculous that all we have to do is get our stuff out to the curb in the proper container with the proper tag, and it gets whisked away. 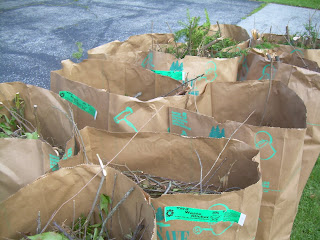 I think we had ten bags in all. Yowza.

IRS update: I called this morning for an explanation of the mysterious form. The rep, while friendly and sympathetic, was as stumped as me. Apparently when they mail these returns back, they close the file and therefore have no record of why it was rejected. I think most businesses run out of people's garages are better organized. She suggested I mail it back in. When I expressed concern that I was starting over and had no guarantee that the same thing wouldn't happen again, she suggested enclosing a letter explaining what had happened. Are they working with pencils and notebooks in this place? Couldn't she make a note in my file?!?

I was running late for work, so I gave up on her. Later that morning, I walked over to the IRS office, which is very close to my work. There, both reps pored over my paperwork. One of them was the very one who had pronounced our amended return good to go six weeks earlier. Finally they said that apparently the IRS needs further proof that we closed on April 30 (the deadline to go under contract in order to get the tax credit was April 30).

Me: Why? The closing date is right here. April 30.
Them: Well, we need more documentation. Did you bring your closing documents?
Me: I have my HUD, which is all that I was told was required.
Them: Did you bring the rest of the documents from closing?
Me: I don't know why I would have done that. Which document do you need?
Them: I don't know, just bring it all. We have to confirm that you were under contract before May 1.
Me: Look, what do you want from us? The closing date is spelled out right here. Since we closed on April 30, we were obviously under contract well before that. The deadline to close is well after April 30. I just don't understand what the issue is.
Them: The investigations office does not agree. Here is a list of further documents that you need to bring in. Just bring all that stuff in and we'll get it submitted.

I stormed out. I gathered mortgage statement, bank statements, and a pay stub showing the new address, while Mark ran over to the house to get our closing folder. He brought our entire house bundle just in case. I took the whole mess in right after lunch and dropped in on the counter (thud), saying, "Well, I'm back. I don't know what you want, so here you go, here's everything I've got." They did ask for it, after all.

The whole thing was beyond ridiculous. I mean, did they think we traveled through time in order to go under contract after May 1 and close on April 30? What a neat trick. Anyway, apparently they were able to find sufficient documentation in the book-length pile of papers. I popped out Pride and Prejudice and Zombies to read while I waited for them to process it. So now it's being overnighted back to the IRS, and we're back to waiting another 8-12 weeks for our tax credit. Two hours of yard work therapy after all that crap was sorely needed!
Posted by Unknown at 6/22/2010 09:54:00 PM