So, do you know what sucks?

You thought I was going to say, "Running on a treadmill."

And it does, much of the time. But that's not what I going to say. What really sucks is moving a treadmill. Treadmills? Are heavy. Dreadfully heavily. Not to mention wider than our doorways. We had grand dreams of making one of the spare bedrooms an exercise room. Unfortunately, that's up a flight of stairs (narrow) and through two doorways (also narrow). After more thought, we chose the den as the new home of the treadmill, its main qualification being that it's the first room you get to when you come inside the house from the garage, which is where the delivery guys put the box.

Actually, it'll work out well, and probably better than the upstairs bedroom. The den is on the north side of the house and is much cooler in the summer...no direct sunlight at all, ever. The weight can rest directly on the concrete slab foundation instead of on the floor upstairs, and there won't be any loud treadmill noises in the next room should one of us decide to get a run in early in the morning while the other still wants to sleep. I think if we'd really wanted to, we could have found a way to get it up there, but those considerations were a great help in allowing us to be lazy!

Speaking of lazy, we got the deck into place and then gave up for the day. We'll assemble it over the weekend. Isn't it funny how lazy we are considering that we're talking about a machine (which took us some time to save up for) that is solely for the purpose of exercise? 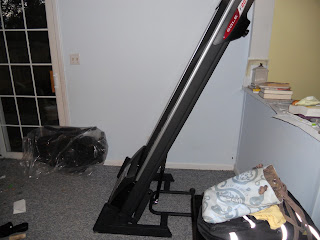 Folded up treadmill...or downhill workout from hell?
On the plus side, putting the treadmill in the corner of the den forced me to move my desk, which forced me to clean it, which it sorely needed. Now it makes me look like I'm organized. 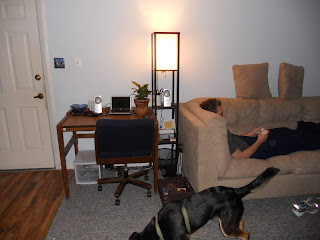 Two posts in a week?! What did we do to deserve such a treat? ;)

It will be awesome once it's all set up! And it is quite ironic that running on the thing is easier than simply situating it!