The first Saturday in May.

It's that magical time of year when Indianapolis puts on its massive half-marathon (35,000 participants), Louisville its venerable horse race, and IU its graduation ceremonies. As has become our tradition even when neither of us are running in the mini, Mark and I drove up to Indy to cheer for our many friends who are running. We brought Rudy along this time. Rudy considered us boring and just wanted to run. 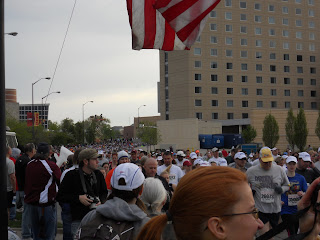 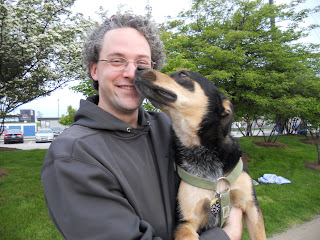 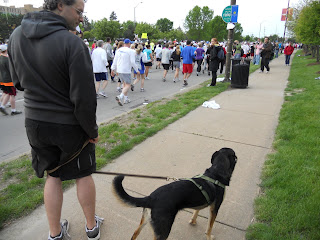 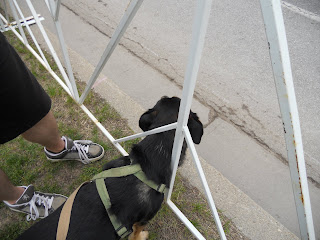 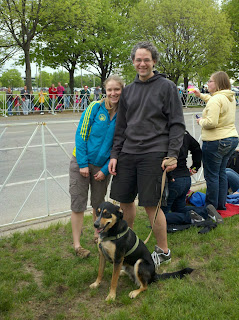 Afterwards we went to a graduation party where there was a baked potato bar. Rachel, I'll say it again: GENIUS. Congrats Rachel! And then we watched the Derby, in which I followed my tradition of picking a horse based solely on its name. Pants on Fire!! He didn't pan out, unfortunately, but congrats to Animal Kingdom. Your name is also pretty good.

Along with these weekend exploits, we managed to fit in some garden time. This giant hulking tree stump is out of the picture now: 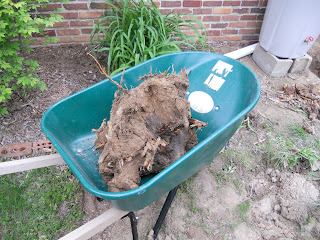 We are making good progress. I think everything will be ready for me to plant my indoor starts in about a week's time.
Quick running update:
I'm running. Not a lot, but it's better than none. I'm up to four miles now, and no twinges from the knee. The achiness that I noticed when I first started up again has faded. I'm still going to be taking it very gradually, but I'm very hopeful now that I've got the injury beat.
Posted by Unknown at 5/08/2011 11:35:00 PM

Love the photos! I will have to post the one of Rudy playing with his new buddy Buster. :) Congrats on getting that stuborn stump out... you guys are brave.

I love the fact that whenever a marathoner shows up at a race their not running, they wear their Boston gear. It's our way of coping, I guess, with the fact we're on the sidelines -- for whatever reason. Welcome back to you to running ... and me to blogging!

Oh Tracy, you're so right. Especially now since I've been so gimpy--I feel better with the reminder that oh yeah, I can run!