Spring is such a time of hope and life that getting any bad news is especially hard. Early this week I learned that my grandfather had gone into hospice, and it was only two days after that when he passed away, peacefully, in his sleep. He was 93.

I have a lot of good memories that I'm revisiting this week. We lived close to my grandparents as I grew up, so I spent many days playing in their huge yard, which included lots of trees and even a creek. Grandpa and Grandma spent their summers for many years in Jackson Hole, Wyoming. One summer (I was in third grade) we had our vacation there in their cabin. Some of my most vivid memories are of that summer. I remember the first full day we were there, Grandpa took us on a hike up a mountain close by and I found a horseshoe in the path that I got to take home and keep. It hung above my bedroom door for years.

One of my favorite memories of him is when he sat down to help me write my salutatorian speech for my high school graduation. He was a charter member of the New Albany Toastmasters, so he knew his stuff when it came to public speaking. I was still nervous as all get-out for that speech, but it would have been worse without his help.

Grandpa is a veteran of World War II. He fought in the infantry in Germany and France and earned a Bronze Star for his heroism. He didn't talk about those days often, but I remember one story about how he and his division were in a castle in Germany and he was nearly killed by a shell. Scary stuff!

The memorial service to celebrate his life will be, aptly, on Memorial Day weekend. 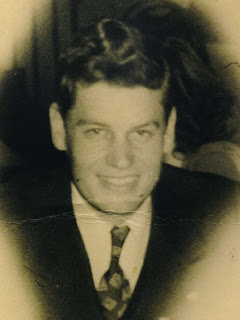 Sorry for your loss. He sounds like an incredible man.

Those are some really special memories you mentioned. Sorry for your loss. So nice that you had so many good times with him. He sure does sound like he was an incredible man. Peace and love to you and your family.