From full to half 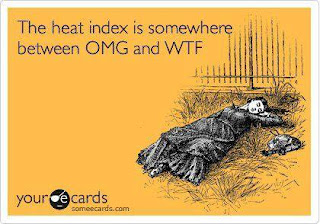 Perhaps it's the relentless blanket of heat that's been upon us all week, but I'm not finding much that's interesting enough to bother writing about. It's one of those stretches of days, better suited to August, where you count your blessings that air conditioning exists and that you have it, and stick to the indoors with cool drinks aplenty. I am more than ready for cooler weather--the other day as I sweated through another lackluster run, I found myself daydreaming about tights, jackets, and seeing my own breath.

I've also been thinking wistful thoughts about pumpkins, persimmon pudding, crockpots, and sweaters. Fortunately, fall weather is nearly here. The heat is supposed to break today and the next few nights are predicted to be in the 40s. I hope my creativity then awakes from its dormant state.

I know it's partly due to the heat, but I don't feel like I'm quite ready for a marathon in just over two weeks. I'm sure I could finish it and maybe even put together a decent run. But thinking about running the half had me a little more excited. In the end a half marathon sounds a lot more fun right now. So I e-mailed the folks at the Mill Race Marathon to see about transferring. According to their FAQ, they allow transfers between races.

I switched from the full marathon to the half marathon once before, in 2011. At the time, it seemed like admitting defeat. Running had been going steadily downhill for almost two years and it seemed like the final insult. I felt terrible about it. I knew I was being sensible, but I felt like I was giving up.

This time I feel perfectly at peace with the decision. I know I'm not giving up (I do have another marathon in early November, after all), and besides, I know I can run a marathon, so I have nothing to prove. I didn't have anything to prove then, either. For that matter, no matter how many marathons you've run, what can be so important to prove that you do something you're not prepared for that might cause injury? If you need to prove something, you prove yourself with the training, not the race. I guess I've done that already, because these days I just want to enjoy myself and well...maybe get a little faster. That probably doesn't ever go away. Thinking of 2011 reminds me that I was on a downswing then, and I'm on an upswing now. I want to stay on that upswing as long as I can.