What I learned from my last long run

As I mentioned in my previous post, I am officially signed up to run 50 miles next month at the Jackson County 50/50. In one day. Without stopping (much). Last weekend I ran my first 50K, my first time going over 26.2 miles, and took the following day off. On this past Saturday, I decided to put in one last long run before starting a three-week taper. I decided another 30-miler would be the best option, this time with a 10-mile follow-up the next day. Accomplishing that on tired legs would mean a huge mental and physical boost and send me into the taper feeling, I hoped, ready to go.

I kicked around ideas for this run during the week. Eventually (the night before) I settled on running five laps of the Pate Hollow trail, a six-mile loop. This would, in a way, simulate the Jackson race (it's five laps of a ten-mile loop). It would get boring, but I figured the mental training would be invaluable. I also wanted to get an extremely early start because we had a mid-afternoon errand to run, so I needed to be home by about 2:00 p.m. I gave myself seven hours to complete the run, and building in cushion time, it meant starting out at 6:00 a.m. I embraced this as a chance to practice a little bit of night running and promised Mark updates via text for every loop. As an added bonus, it was also opening day of firearm deer season. 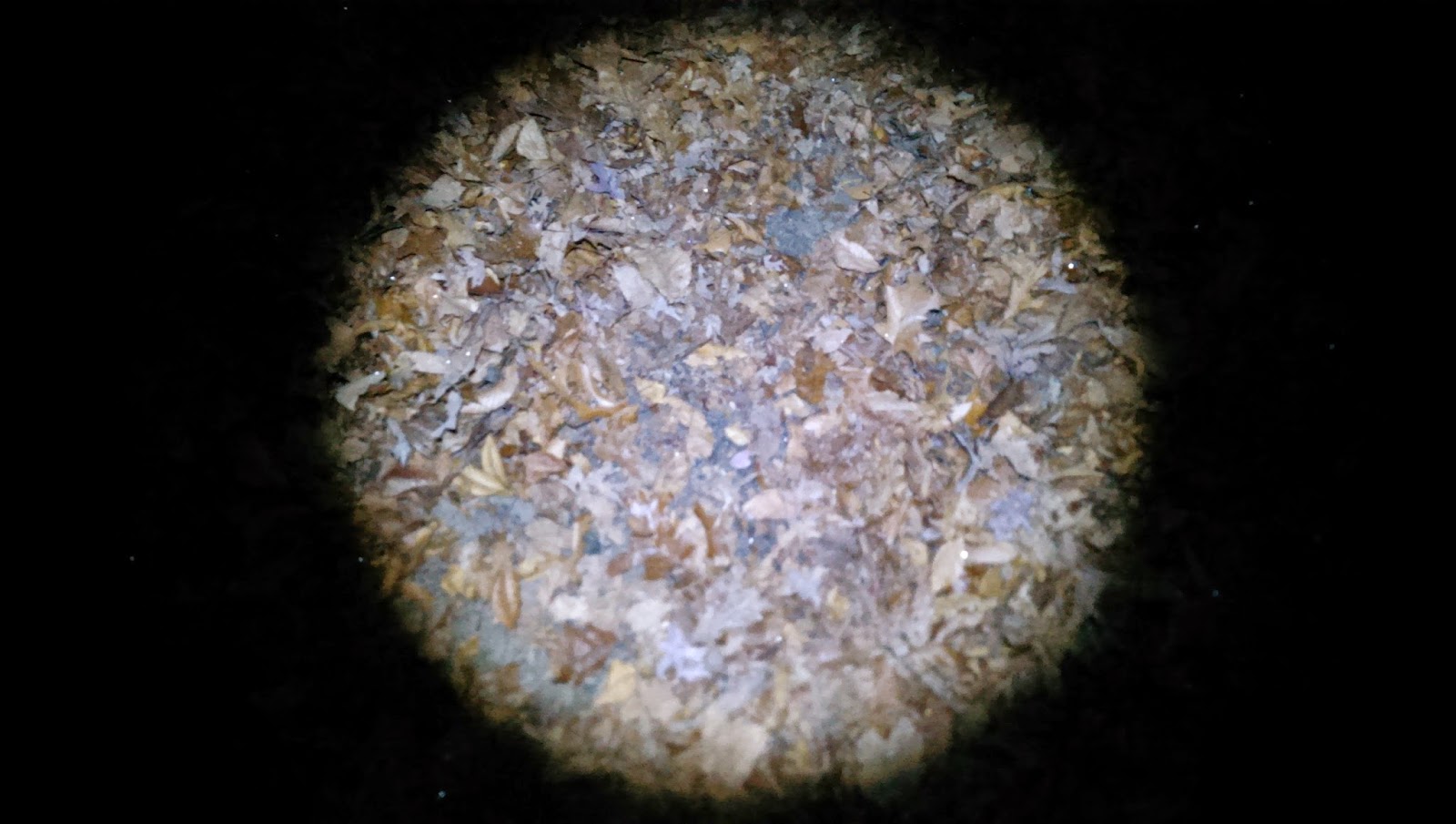 Another reason that I chose this trail is that it's close to my house and easy to get to. I managed to get out there and actually get started very shortly after 6:00. It was REALLY cold for mid-November, about 15 degrees, and still completely dark. I wore tons of extra clothes at first, including extra pants over my tights, knowing I could stop back by the car and adjust as needed. Off I shuffled, headlamp trained on the ground. Of course I went very slowly and gingerly because I didn't want to trip. It was also hard to see where the trail went in places because of all the leaves down, so I had to stop often to swing my light around and find the path.

Within 15 minutes, I could already discern that the horizon was beginning to lighten. My reward for hauling my ass out there on that absurdly frigid morning was a clear sky with the moon and stars gradually giving way to the sun. It was a wonderful experience. 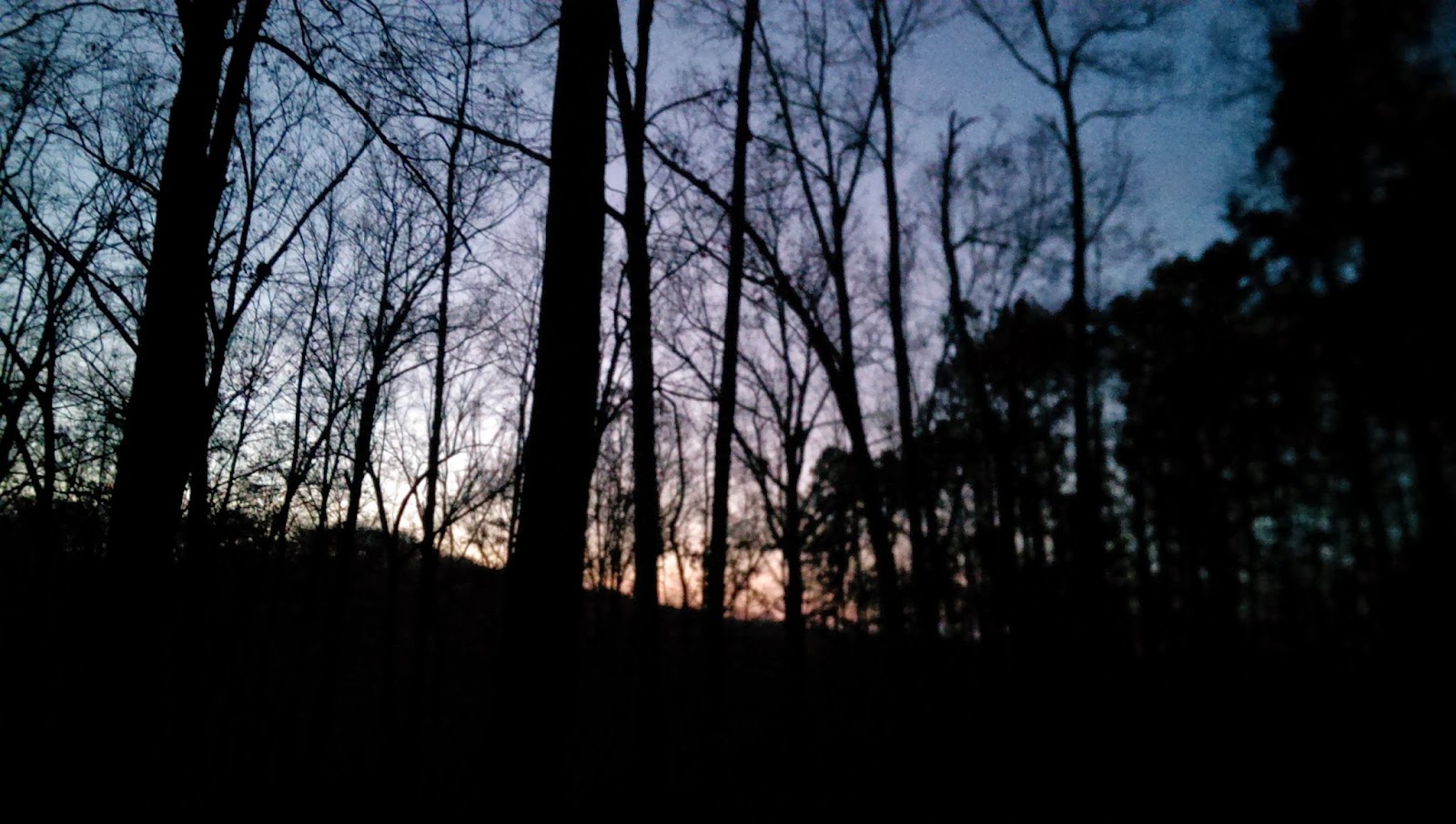 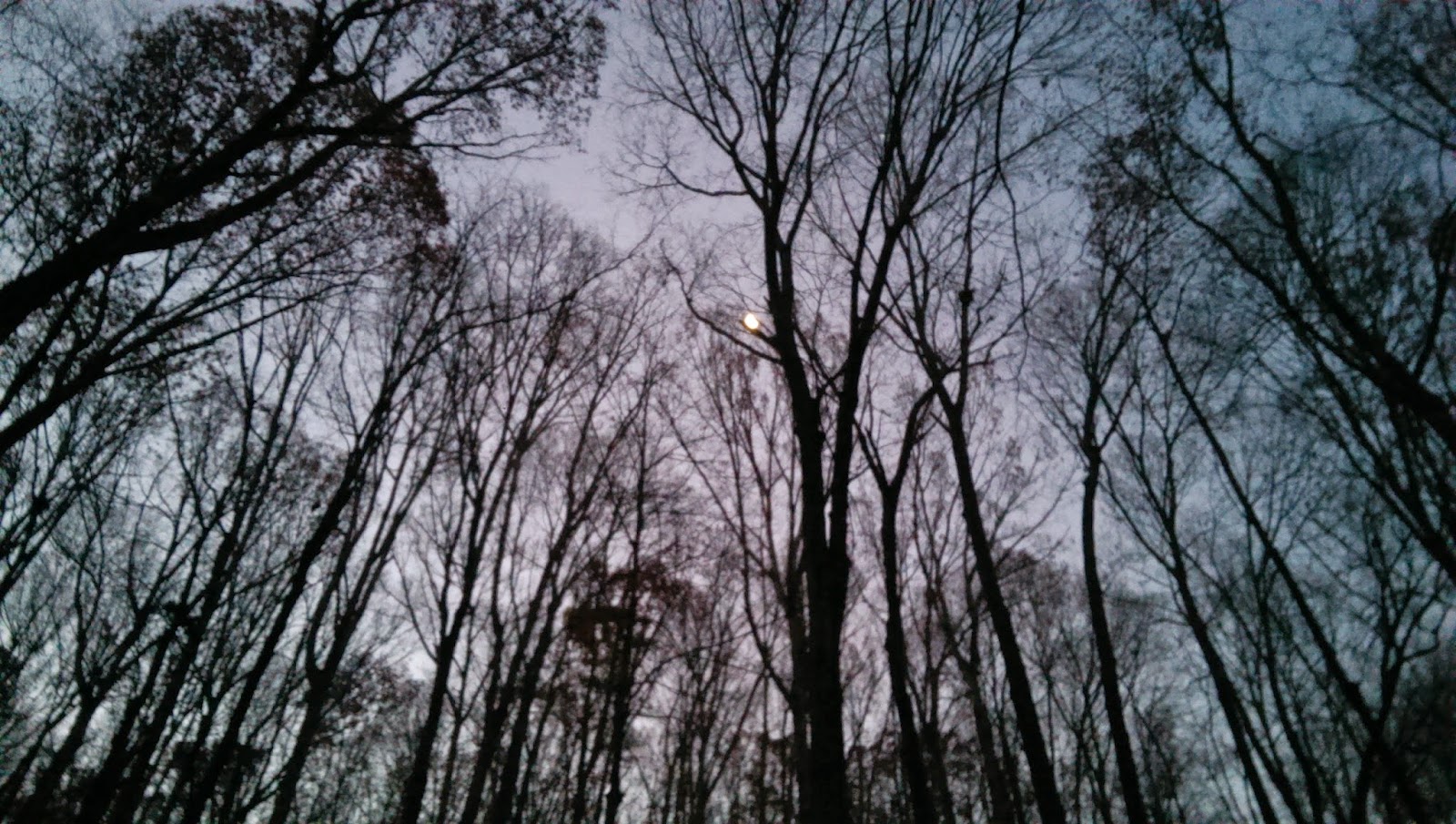 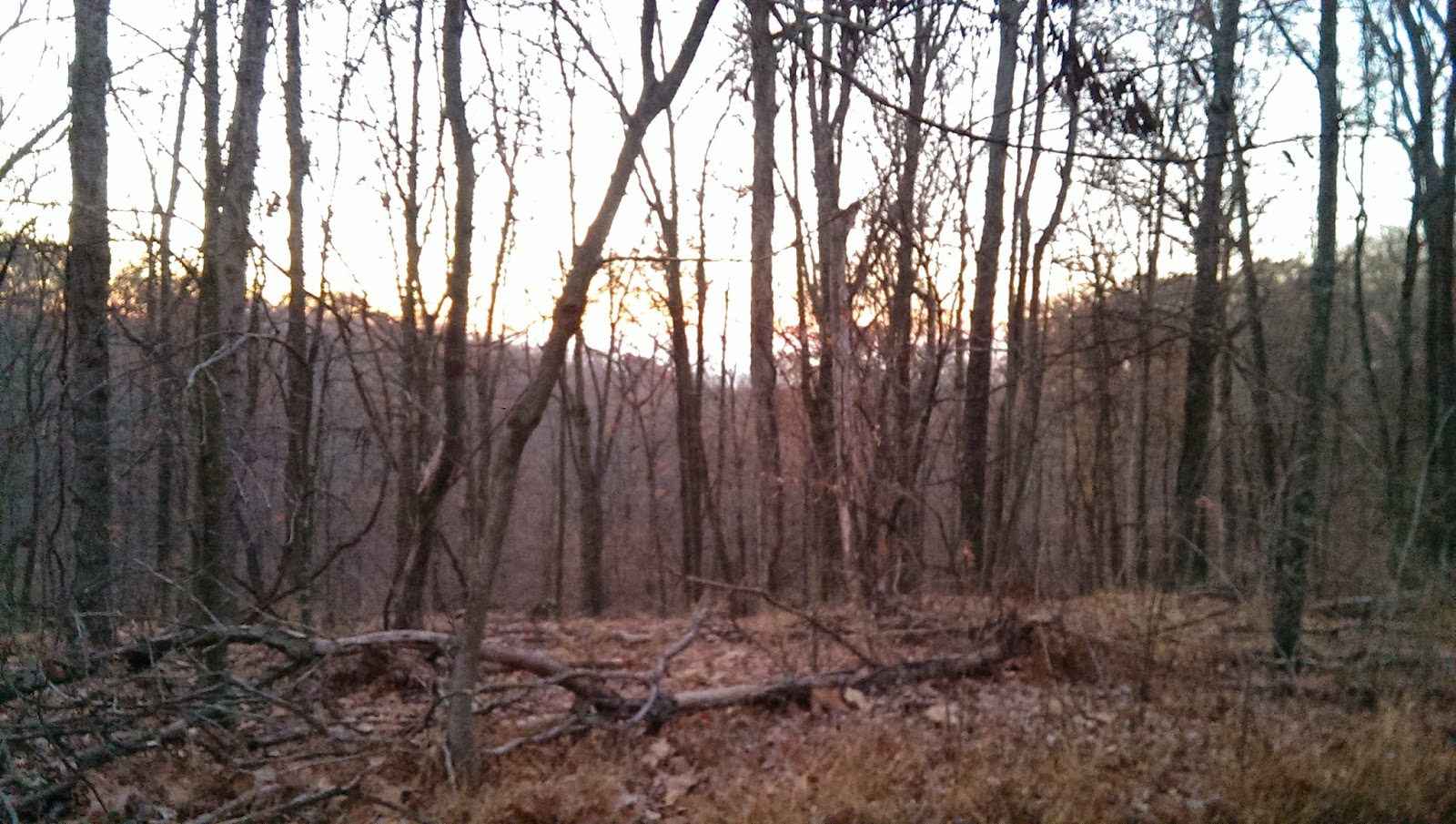 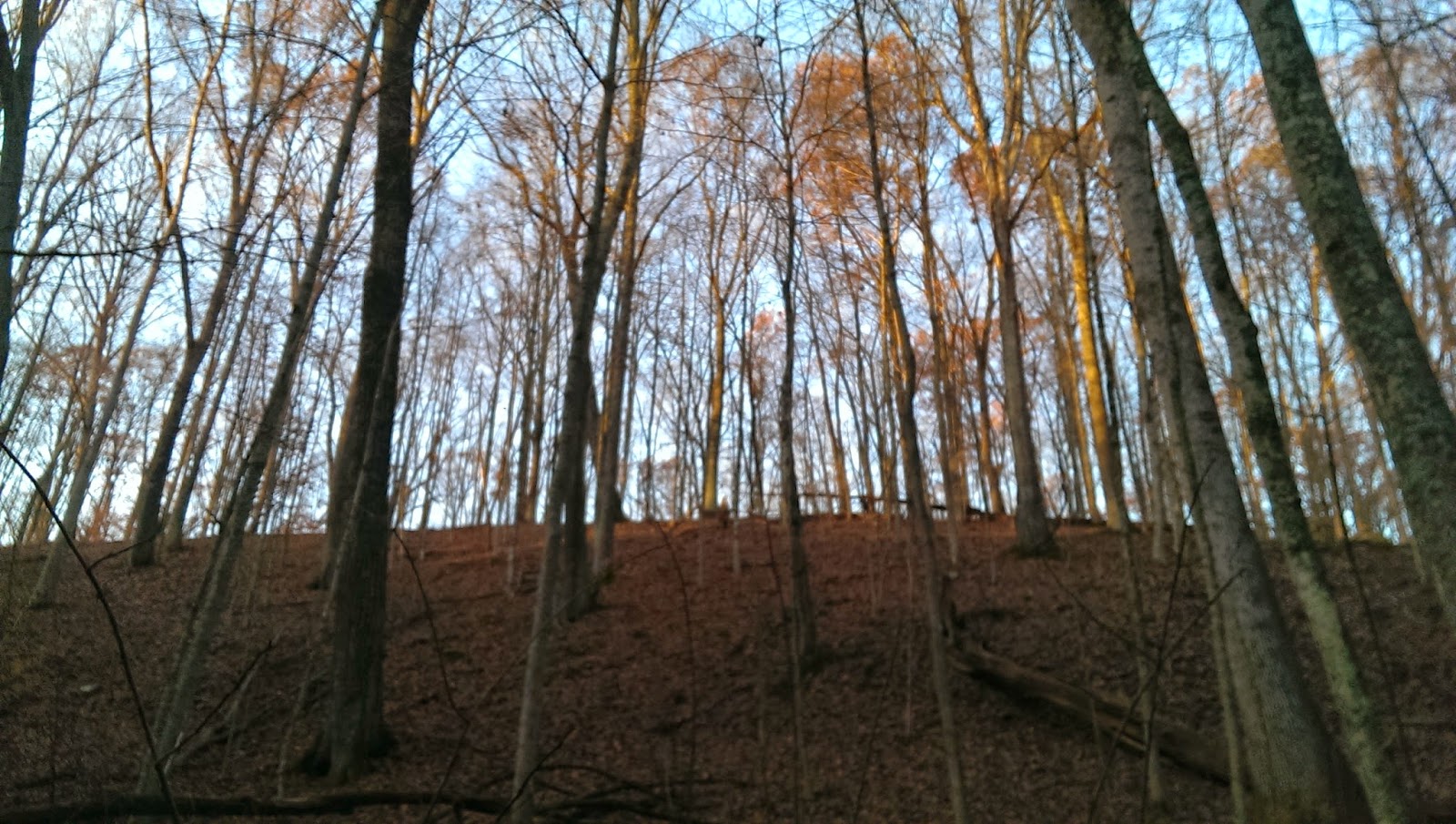 I picked my way along, stopping occasionally to get a picture. I discovered early on that my hydration pack tube was freezing up, but I had prepared for that possibility. After each drink of water/Tailwind, I blew the fluid back into the bladder and stashed the bite valve down the collar of my top layer, a 3/4 zip pullover. This worked perfectly and I had no further trouble with hydration.

I warmed up enough in the first loop to shed a layer on top and bottom. As I got into the second loop though, I swear it got even colder and I struggled to keep my face and mittened hands warm. I started to see lots of hunters out and about, and heard many distant gunshots. I'm pretty used to this, and I dressed especially garishly in order to be as visible as possible, but it's still a bit nerve wracking. Nothing to do but stay alert and keep moving. I exchanged good mornings with them, and I'm sure both sides were thinking largely the same thing: "That person is just plain crazy." I actually saw someone tent camping near the lake, which I can't even imagine doing at those temps. 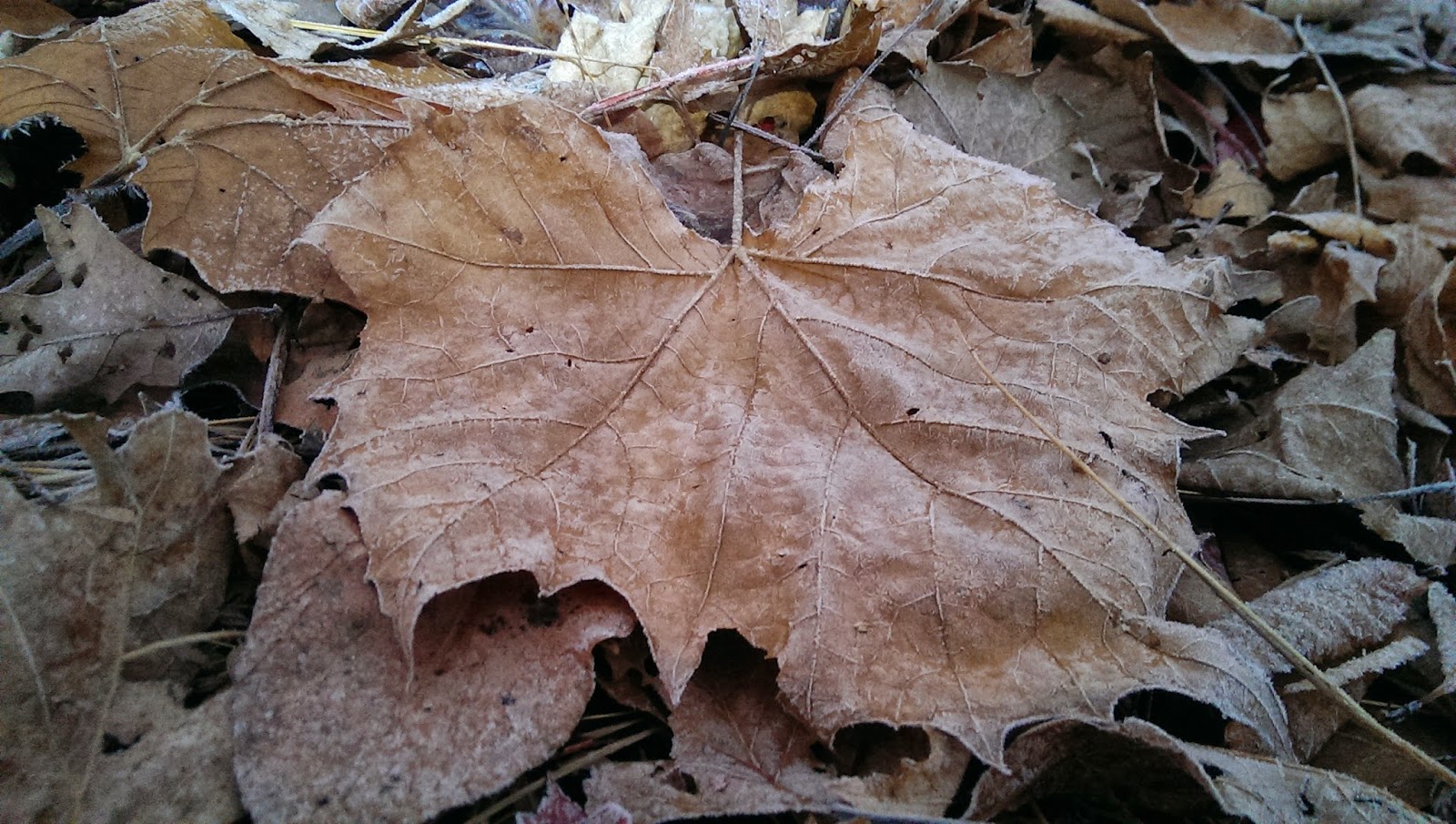 On my second loop as I approached the lake, I paused to get a picture of the misty water, since it had been too dark on the first loop. This is when I realized that my phone was completely dead, despite the fact that I had my portable charger hooked up to it. I sat down for several minutes to try and remedy it, but I couldn't get the charger to stay on and therefore couldn't get the phone to stay on. Discouraged and struggling to make my devices work with my numb mitten-paws, I thought seriously about bagging the whole shebang and heading home to take an hour-long hot shower. I was already behind my tentative schedule and I really did not want to be out there without a phone; I could have lived with just estimating distance and time for the day, but I had promised Mark updates and I couldn't let him worry.

Finally the idea waddled through my frosty synapses that it was just too cold for the electronics to be working. I had already seen that my phone's flash wasn't working because it was too cold (it actually pointed this out whenever I took a picture). I rearranged my rig and stashed the charger down my shirt, gave it a couple of minutes, and tried turning it on again. Bingo! Phone powered back up, I turned my Strava app back on and major bonus, it resumed recording from where I left off! 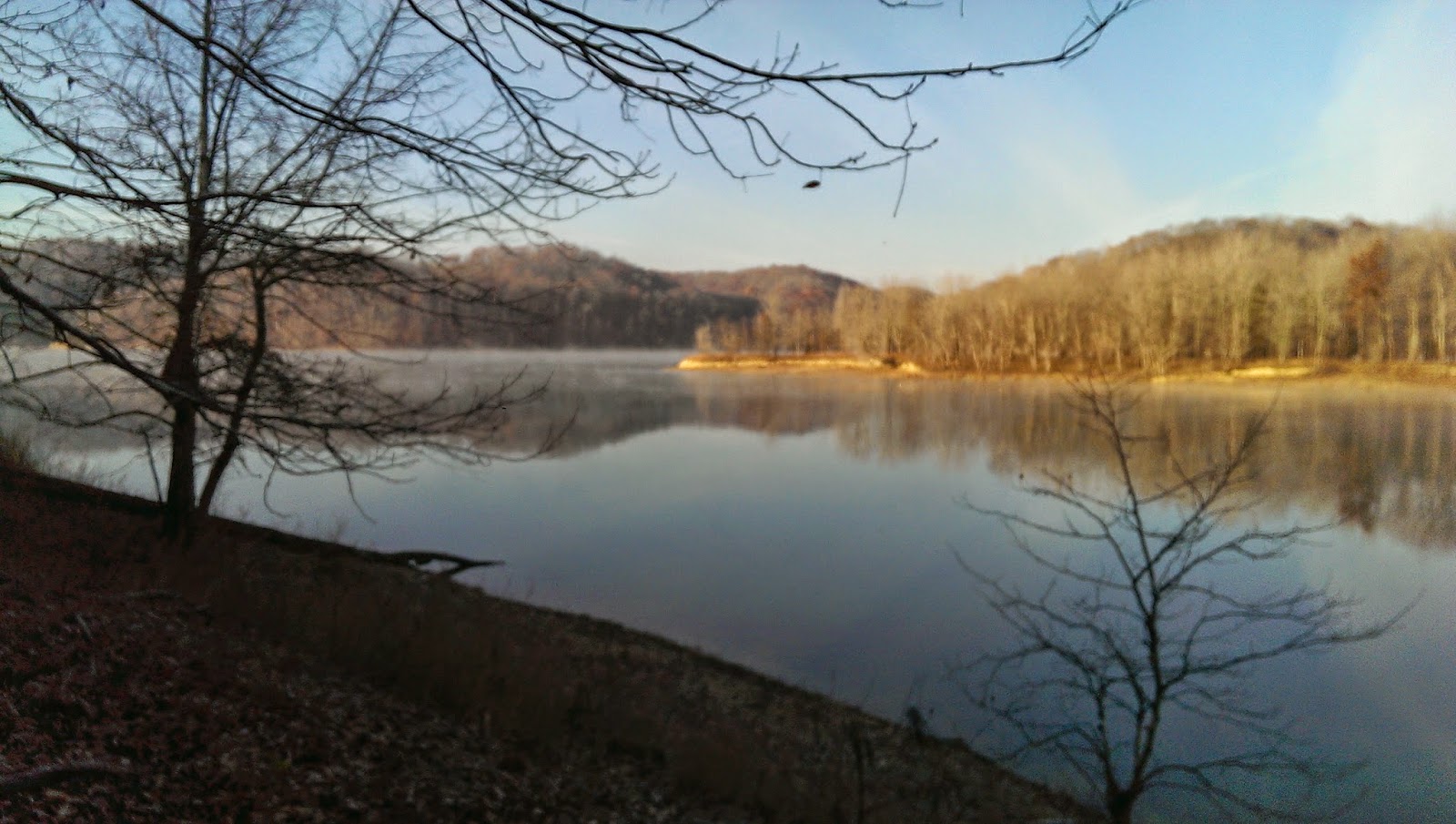 Feeling rejuvenated, I kept going (after taking that picture, god dammit) but suffered pretty badly through the rest of that loop because it was so frakking cold. I just could not keep hands and face warm, and really all of me was pretty cold. That ten minutes or so of inactivity really cost me.

When I got back to the car again, I spent some time trying to make my stupid fingers work well enough to unclip my hydration pack so I could top it off. The rest of me was feeling marginally better, so I trusted to the fact that now it was after 9:00 a.m. and with the sun out, it HAD to warm up a little bit. Within a few minutes, I did in fact begin to warm up, and finally, around the overall midway point in the run, I actually felt more or less comfortable. I picked up the pace and actually enjoyed myself again for the first time since the first half of the first loop.

Loops 3 and 4 were pretty uneventful. I saw some other runners and hikers, more hunters, two dead deer, and a lot of blood trails which I fervently hoped belonged to deer. My legs had been feeling good so far, but there was definitely fatigue making itself known and they were gradually getting heavier. All the leaves on the trail contributed to a feeling that I was just shuffling along, barely lifting my feet. I put on my music, something I VERY rarely do, and that was a welcome boost.

At the end of the fourth loop, I didn't really need a stop at the car, but I stood for a moment and just caught my breath. Okay, I told myself, just one more. The eternal end-of-run litany of runners everywhere--just one more mile, lap, straightaway, interval, repeat. Strangely, the fact that my "one more" meant another six miles and another hour and a quarter was not too intimidating. I felt a mixture of calm readiness and resignation. This would be my longest run ever at Pate Hollow. I once did four laps there and felt like I had conquered the world. Now I was going to increase that by one. Eeeep!

I had been walking the big climbs since the beginning, but this time I felt like I was going especially slow on them, and my legs felt so heavy. The flats and descents, though, still felt pretty good. I could tell I was having to concentrate harder in order to focus on my footing. I remembered that I was only a week out from doing a freaking 50K, and marveled anew at what a human body can do. I was hurting some, but it was all low level. The largest part of the mental battle was starting to run again after a walk break. It was so tempting just to keep walking. A few times I shuffle-ran up a smaller hill at an achingly slow pace rather than walk, just so I wouldn't have to walk and then start running again. When I did stop to walk the climbs, though, once I got my legs moving again, I found that I was able to keep my pace even with what I'd been doing so far, just working a little harder to do so.

In time, I found myself on the final climb and headed back out to the car. The feeling of accomplishment was almost as good as the previous weekend's 50K. It was 30 miles instead of 31, but I recorded slightly more elevation gain, and doing it solo and unsupported was tough too. I'm really, really glad I got that run in. I learned a lot from it and feel about as ready as I think I will be able to feel to run 50 miles.

The ten-miler the following day also went well. No significant soreness, just fatigue. Forty-mile weekend is done, hay's in the barn, and it's taper time!