Some good numbers this quarter

Although it hasn't been reflected on my blog, I have been racing quite a bit this year. And it's been going well. Surprisingly well! I'm actually starting to think about the possibility of breaking PRs that I've considered untouchable for years. It's hard to put into words what this means to me.

In 2009-2010 (immediately post-assault, trial waiting game, aftermath), I had a super successful cycle of training. I ran a lot and it translated to some fast races. But the motivation to do all that running came from a very, very dark place; I expelled a lot of mental crud that otherwise might still be there. It was good for me, and it kept me sane. It gave me a fierce, dark joy that I took a traumatic experience and used it to run faster. There's nothing at all wrong with that; in fact, it's a very good thing. Making lemonade out of lemons. But I was certainly not, as the saying/marketing slogan goes, running happy.

In the years since, when I look back, I realize my best running times are inextricably linked to a total shit time in my life. Could I only access motivation from pain? But then the past year happened. I steadily built mileage and now I'm really starting to see results. And it's come from a place of love and friendship. It's hard to put into words why, but this makes me really, really happy. I feel like, in some small way, maybe I've come out the other side.

This year I've run a 5-mile trail race, a 50K, a 60K, and a 5K. This weekend is the Hoosier Half and in another six weeks, the Bayshore Marathon.

Frosty Trails 5-Mile
I ran this once before, but got lost and ended up running about 7 miles, so I don't have a good gauge for my progress with this race. But 41:59 (8:04 pace) for a 5.2-mile trail race in Brown County is pretty darn solid. I got second place in my AG and 7th place woman in a tough field. Yay!

Louisville Lovin' the Hills 50K
This was a scenic but very tough trail ultra just outside of Louisville, KY. I measured 33 miles and 5,500 feet of gain (usually my measurements are a little short of the true amounts on trails). That's about 1,200 feet more than the Owen Putnam State Forest 50K. Ooof. I came in fourth place for women (and was the last to dip under 7 hours at 6:56). Strava estimated my 50K effort at 6:27, so sort of a PR, whoo-hoo!

Land Between the Lakes 60K
I had planned this for a sort of midseason goal race. I was excited about it because a lot of friends were going and it was supposed to be easier than the ultras I had done so far, so I thought I might place higher and run a faster time. In fact, my goal was to see if I could make my 60K PR faster than my 50K PR.

A few days before the race took place, the RD made the difficult decision to switch the course to roads instead of trails because of the excessive amount of late season snowfall/melt and predicted rainfall in the days leading up to the race. I was disappointed but agreed with the decision. A thawing trail is very fragile and can be badly damaged by too much traffic. I was nervous because I hadn't done any long runs on roads recently, but still hopeful about knocking out a good PR. I was also excited because I would be in the same race as Traci Falbo, former American record holder for a trail 100-miler and current world record holder for the 48-hour run, who was gearing up for the 24-hour world championships.

The run ended up going really well. I held a pace in the high 9:30s for about 50K before I had to start walking the uphills, but even though I held on fairly well (my overall pace for my moving time was 9:44). The race ended up being 39 miles, and at 4,000 feet of gain, I heard it was actually just as challenging if not more so than the trail route. I finished in second place for women with a 6:26, accomplishing the goal of making my 60K time faster than my 50K time. I feel like that stat is all you really need to know about trail ultras.

IU Run for Habitat 5K
After the ultras, my plan was to shift gears a bit and do more road running/speedwork to get ready for the Hoosier Half and the Bayshore Marathon. The first half of this year is basically a big experiment to see how ultra training affects my road half marathon and marathon times. I had done a little speedwork earlier in the year, including a couple of tempo runs, one interval workout, and a couple of hill workouts. Then I got into the mix of ultra tapering and recovery. Finally, two weeks ago, I resumed with a hill workout. Just one week before the Hoosier Half, I decided to jump into a local 5K just to see what would happen. It was two days after a tough fartlek workout and a couple of high-mileage weeks, but I felt good and was eager to see how things would go.

I ran a 21:33 and came in first for women. Really exciting!! It had been a really long time since I'd run that fast, so long that I had to check my log for details. In fact, it tied my PR for a certified road 5K, which was from 2010 (and on a perfectly flat course in Indy). The course was relatively flat for Bloomington, but with two out-and-backs and an uphill second mile, it wasn't particularly fast, so I think chances are good I could even improve on it this year. Sub-21?!? It's only ever happened on the track. 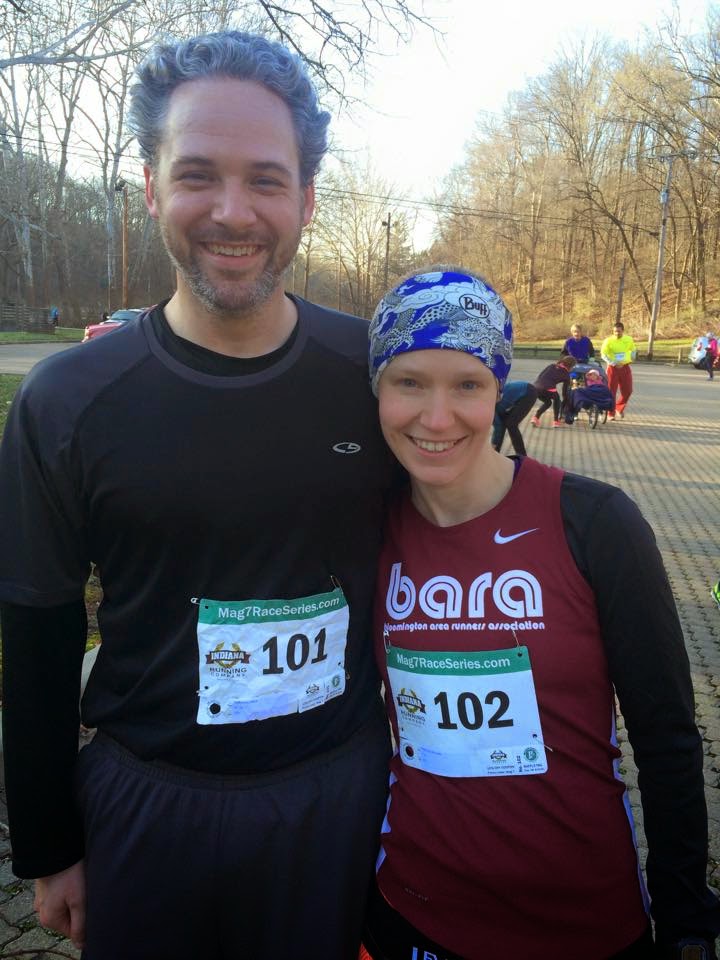 I'll do at least one or two more 5Ks over the summer; Mark's goal for the year is to officially break 20, so I might as well tag along when he races!