Bourbon Chase 2015: 15 miles of Kentucky countryside on a perfect day

We got perfect weather for this year's edition of the Bourbon Chase, my first since 2013. It was great to be back! I was especially excited because I've been running so much lately that I thought I could really get in some fast leg times and get an idea of my readiness for a possible half marathon PR. I was also motivated by the fact that we lost our fastest runner after our team start time was finalized, meaning we needed to make up some time against our projections.

I had projected 8:00 min/mile pace, which given my training this year is fairly conservative. If I ran longer legs, I thought I could hit that at an average, but probably not go much under. When I got some of the shorter/easier legs, I knew I could be well under my projection.

The race starts at Jim Beam in Clermont, KY. We milled around for a bit, collected our swag (women's sized shirts, AT LAST, thank you Bourbon Chase!), and got in the first bourbon tasting of the weekend. At last our start time, 1:15 p.m., approached and I got ready to go. 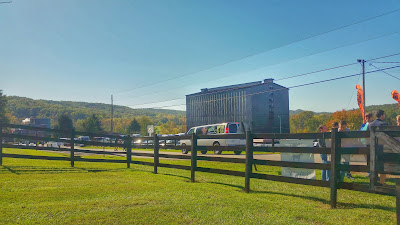 Leg 1: 7.2 miles, 53:42 (7:26 pace), 440 feet of gain
I was our team's lead-off runner, so I actually toed the line and started with the gun. The first leg is unique in that part of it is on an actual dirt trail, part on gravel road, and part on narrow asphalt bike path before turning on to an actual road. It starts off sharply downhill and then turns onto the trailhead, where it climbs gradually for a while (with some flat sections), and then turns out onto the road, where a few sneaky rollers lie in wait for tired legs. 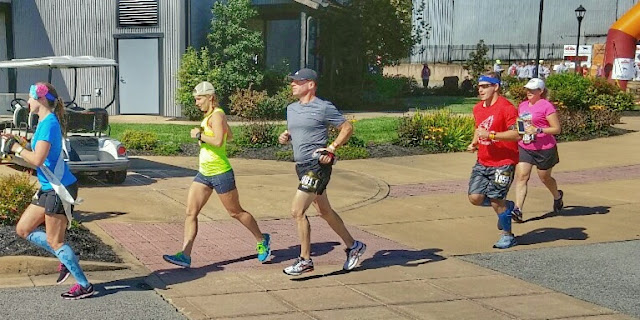 My goal was to run the first leg as a tempo run: hard, but not all-out. I also wanted to "win" my starting wave. One lady went out a little faster than me, but I passed her within about a quarter mile and hit the trailhead in the lead. There was one guy who stuck pretty close behind me for about the first 3-4 miles, even drawing even a couple of times, but he dropped back and was out of sight by the time I finished. I caught and passed four people from the previous wave.

I was really pleased with this run. The splits were uneven because of the hills, but my GAP (grade adjusted pace) times calculated by Strava were nearly dead even (miles 2-7 were all within the 7:10-7:16 range). That really makes me feel good about a possible half marathon PR at Monumental!

After the rest of folks in my van got their legs done at Maker's Mark, we tasted some more bourbon, did a little shopping (I bought gourmet sauce for Mark and bourbon-flavored coffee because why not?) and then we went on to Danville to get a bite to eat. We are creatures of habit, so we went to where we always go: The Hub, a coffee/cafe spot on Main Street. I ate a bacon, egg, and cheese sandwich on a bagel, charged my phone, and then some of us headed back to the van to try and get in a nap. I don't think I got much real sleep, but just lying down was better than nothing. After a couple of hours, around 11:00 p.m., I checked our Google spreadsheet (which we kept updated throughout the race) and started getting ready to go again.

Moments before our no. 12 runner came through, I realized my headlamp wasn't working, so another teammate had to run back to the van and grab his. Luckily he was just in time!

Leg 13: 4.5 miles, 32:10 (7:07 pace), 120 feet of gain
The flat leg, so I was hoping to be a bit faster on this one. It was about 11:30 p.m. I had some initial fiddling with the headlamp (it was actually upside down at first) but then got myself situated. The first two miles were a smidge downhill and I was actually on sub-7 pace through the first half!

The night legs during these relays are always a bit surreal; you're running in complete darkness, except for an uneven line of red, blinking lights ahead of you that signal other runners. Sometimes a van would go by. One lady even yelled, "I love your outfit!" I was wearing INKnBURN chameleon capris (it was under 40 degrees by this time) and a blue tank top with blue/green/purple arm warmers in a swirly design. Haha, glad someone likes it!!

My stomach started feeling a little wonky, and I lost a little bit of focus, but I worked on grinding hard for the last 1.5 and kept the pace down pretty well. I passed nine people. In fact, because the spreadsheet hadn't refreshed, I actually got there almost 10 minutes earlier than my team expected and they weren't down there waiting for me yet. We didn't lose much time, maybe a minute tops. 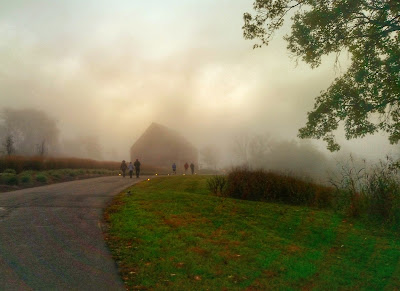 After we all finished, we drove on to Wild Turkey to try and get some sleep. I couldn't really get comfortable, so I don't think I did much more than doze off. Finally it started to get light outside and I started to get ready. It was a gorgeous, foggy morning. I was projected to start again around 9:00 a.m. We walked over to the tasting room (I didn't taste any this time—I just wanted coffee). My stomach was definitely not very happy with me, although this was unrelated to the running or the food/drink intake; it was simply that time of the month.

It was even colder for my third leg than for my second, but I wore shorts this time because I knew the sun would be high. Tank top and arm warmers as well.

Leg 25: 3.3 miles, 24:32 (7:22 pace), 417 feet of gain
Less than half the length of my first leg, but with the same amount of gain. Ouch! Now I was running on no sleep, but at least my stomach felt mostly okay during the run. This one takes you downhill and across a beautiful bridge, before going right back uphill for about three quarters of a mile. After that it's short, steep rollers for the rest of the way.

It was definitely the most beautiful and scenic run, and I tried to take it in, especially on the bridge. It was about 9:00 a.m., so the sun hadn't been up for long, and there was thick fog shrouding the river. I wish I could have gotten pictures there. The hill after the bridge was pretty brutal--I saw lots of people walking on this and the following hills.

Originally I had hoped to run even faster on this one, but those hills defeated me and honestly I was really happy with the pace given how much gain I recorded. It was a really good effort and I passed eleven people! I suspect that last guy I passed was really not happy about it because he sped up and tried to stick with me, but that didn't last long. 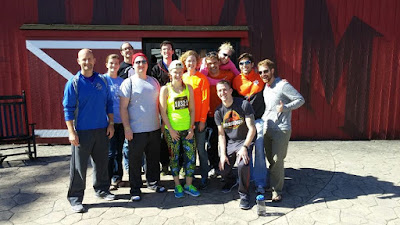 Our team ended up finishing a couple of minutes before 7:00 p.m., which is right in the thick of things and much better than our projected time of 7:41. Great job, team! I was really proud of everyone. Last time I ran the Chase, my recap ended with, "One of these years I want to average under 8:00 min/mile for a Bourbon Chase." This time I averaged 7:21 (albeit on easier legs than last time, but I think I could have still been at least a little under 8 even on more miles). I definitely finished this one on a much better note than last time!!