I was slower than my goal, but pleased overall. Since the last time I ran was last Saturday at the Training Series 5K, I wasn't exactly in tip-top shape. Starting out I felt tired, just like at the beginning of last week's race, but this time I dug down kept a rhythm going. The first mile was in 8:04. I felt like I was slowing down, but the next mile was surprisingly 7:49. This gave me a bit of a second wind and I started pushing. I rounded a bend and saw the finish, but knew I still had about a half mile to go. We had to run past the finish line and follow a small loop before circling back to finish. Ugh. Cruel! My finish time was 24:11, meaning I ran my last 1.1 in 8:19, or 7:34 mile pace. I believe this may actually be my first negative split race.

The temp was a balmy 30 degrees (or at least it felt balmy to me after the frigid running conditions lately). I had no trouble deciding to wear shorts, although I was one of only two or three that I saw. There was a light dusting of snow on the road and some falling, but not enough to make footing a problem. Overall I had a lot of fun and certainly felt great to be running again! 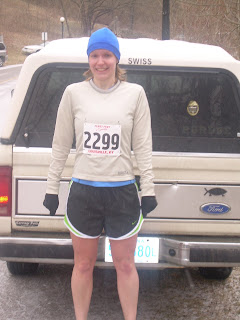 Today I did 7.47 miles for a long run. It wasn't too bad, but it was hard towards the end, so I think that's enough of a long run for now. I should be able to catch up in the next few weeks provided there are no more hiccups in training like ice storms, illness or the like.

Starting tomorrow it's going to be much warmer, like 40s-50s, for the foreseeable future. I am so happy!! That nearly take us into March, so hopefully we are pretty much done with at least major snowstorms, if not colder temperatures. Yay!