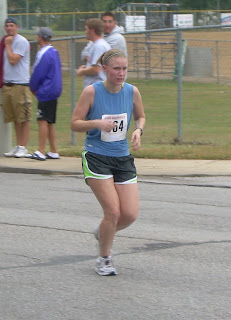 Not really a race, per se; I treated this as a pace run in preparation for Twin Cities.

I was amazed that the first mile was on pace; we started out well back in the crowd. We were behind two people dressed as a banana and a beer bottle, if that tells you anything. I caught the banana within a mile, but the beer bottle lasted until mile 4!

Now I was in my rhythm. I tried to stay even on the hills, which are pretty relentless on this course. I was passing a lot of people on the hills.

Whoa--that was a quick one. There was no mile in this race that mostly downhill. The hills were mostly smallish but constant, making it hard to keep a steady rhythm. I think I might unconsciously sped up a bit since the last mile was a little above 9.

This was more like it. I still felt extremely comfortable at this point. Still gliding on by people. I was starting to feel the humidity a little, though. I was completely soaked through and the only thing that didn't make it utterly miserable was the cloud cover and a welcome breeze.

Eeek! A little too fast there. Again, not sure how it happened. A bit more downhill, probably. This was a mile headed south, before we turned back on Winslow to head north on Henderson, so some larger hills ahead. I reflected that this mile was at Boston pace and wondered if I would ever run 26.2 miles at this pace. It felt perfectly comfortable, but then it was a single mile.

Uuugh. Hit the bottom of the hill headed back up Henderson and for the first time was intimidated. Legs were starting to feel dead. Mark joined me briefly, running the northward parts with me until the end.

Still fighting to keep pace, but now struggling on the uphills. Rob and Michelle passed me around here somewhere.

Well, crap. I just had to stop and walk through the water stop. I think this is where Michelle passed me. Drank more than the few sips I had been getting before and this helped a little. But the rest of the race was a gradual uphill to the stadium and I was dead tired. The longest pace run I had done before in training was about six miles, so this was an ambitious undertaking.

Much of this was an out and back from Indiana down Seventh around the fountain and back to Indiana. Passed Michelle again (she had to walk too). Seeing the people ahead of me running back helped a little, but I had to stop about walk for a moment. I started running again when Becky caught me. Mark joined us again at Indiana.

The last push up Indiana was painful. Mark helped, but I was struggling. We caught Michelle again, who was walking, and she said, "This is ridiculous" and started running again. She drew ahead. We hit the top of the hill, where Ben and Jessica were waiting and cheering us on. That helped. We started back down the hill towards the finish. Marked peeled off at 17th Street, and I sped up and caught Michelle and we finished together.

WHEW. I think on a better day I could have maintained pace a little better, but the humidity, a hard weight-lifting session on Thursday, and lack of race preparation conspired to tire me out faster than normal. The last two were mostly on purpose because I wanted it to be a regular training run. This is also the longest pace run I've done. I think I also unconsciously let myself speed up too much in the middle. I must not let myself do this again in the marathon. To hit 4 hours I need 9:10s, so sticking right at 9 is plenty fast enough. I do feel pleased, though, that I was only three minutes slower than my all-out half marathon in May, especially considering the fact that the courses are at utterly opposite ends of the spectrum in terms of difficulty. I think I'm definitely in better shape this time. One more hard week, week and a half, and it's taper time. Hard to believe!
Posted by Mir at 9/09/2007 10:25:00 AM

Weather can always be a big factor with running. Good luck on your upcomming marathon. Sounds like you should be able to hit your goal.

Nice job Miranda You did really well under the conditions!! looks like you are on track for your marathon goal!!

The fact that you are hitting your goal pace - even above - consistently certainly indicates you have the better for greater improvement in overall time in the near future. Keep at it!

I was being beaten by a man in a Superman costume, cape and all, once. It became my single, overriding goal for that race: Please don't get beat by someone in a puffy costume.

Sounds pretty good to me, especially considering the hills and the heat. Minnesota should be pretty nice in October.

sounds ok to me...i notice a big difference without heat/humidity...plus some days you have it, somedays you don't.

Great pace! You ran very strong on a hilly course with humid weather. What a mental boost! (and a great training run). Way to go :)

Nice Job! Thanks for mentioning us in your blog. Good luck in the Twin Cities Marathon!

See you next year,
Banana Man and Beer Man (Brian and Mike)