So, I know I haven't posted in a while. This is mostly because I spent most of this week being sick. I only ran three out of the seven days (luckily, these included a long run and a 15K race, so mileage-wise it doesn't look quite as bad as it could). Yesterday was also the last "active" day of work, as in, the last day of doing packets. I'm staying on another couple of weeks to finish up some copyright issues. So I've been feeling kinda blah in general lately.

But, I came back strong today with a massive PR in the 15K! I had very low expectations coming into the race, after the lackluster week of training and the illness. I'm still fighting off a runny nose and a pesky cough. Our mini training group did this race as one of our challenges, so we all set goals before the race. This made me want to be even more conservative than I may otherwise have been. I figured on the worst-case scenario: 1:18. I really wanted to PR, but I also didn't want to risk losing points I could have earned for the team if I didn't have a good day, so I backed off. (If not for being sick, I think I would have set 1:15 for my goal.)

So, starting out, I just tried to stay relaxed and not go out too fast, as usual. 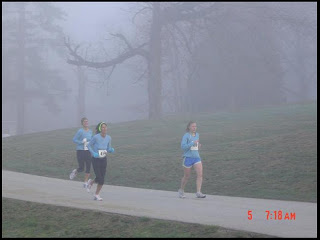 This is a picture from the top three females in mile one (I'm on the right). First mile was 7:26, which was, I thought, way too fast. I didn't think I was capable of going much under 8 minute pace at the most, so I tried to back off. Second mile was 7:40. I still felt really good! Maybe, I started to think, I'm over being sick and can really have a good race. The morning was sunny, but the sun had not yet burned through a heavy layer of fog. 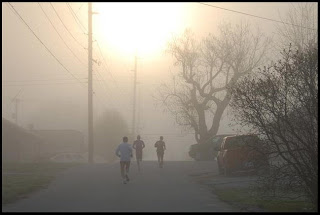 This picture kind of shows how it was during most of the race. The course went out of town and along some quiet county lanes, really a very nice course all around, pretty flat with a couple of minor rollers. Just enough to add variety. With only about 70 people total on a 9.3-mile course, things got spread pretty early on, and the runners in front of me started to fade into the mist a few miles in. I would see bobbing figures up ahead like phantoms. Luckily the course was well-marked and there were volunteers to help point us in the right direction. Miles were marked with cones and spray-painted numbers. This was a great no-frills race. Give me a good, clearly-marked course, mile markers, and water and a bit of food at the end and I am good to go.

The race finished with a lap around a track, which is always a good time. I rounded the track and came home in 1:10:47! This is a PR by 5:32 over last fall. I am so massively excited that I never want to reset my watch. :) I was 10th overall and 2nd female. No awards, but I don't care! Never in my wildest dreams did I think I was capable running this fast right now, especially after being sick all week. This time predicts a sub 1:45 and sub 3:40 for half marathon and marathon, respectively. Depending on how the half goes, I might think about making a real BQ run on May 31.

Holy fast miles Batman! Great job Miranda and keep it up. Looks like your winter training has paid off also.

Nice Job!
Always great to PR.
3 more weeks and we can compare notes on the KDF.

Congratulations Mir! I'm so happy for you. GREAT job. Keep it up, girl!

Wow, CONGRATULATIONS! That is a great PR...not just shaving a few seconds. Keep working but be mindful not to get too excited and get yourself hurt before going for the BQ this spring. Your training is on the upswing big time!

Wow!! Congrats on the huge PR and the 2nd place finish. Amazing!! Sounds like you had no problem holding that pace. I'd say BQ on May 31 is very likely!! Great job out there!

And awesome pics too!

very nice mir, congratulations on your PR all your hard work is paying off. Girl you go for that BQ!!

Hello. This post is likeable, and your blog is very interesting, congratulations :-). I will add in my blogroll =). If possible gives a last there on my blog, it is about the Transplante de Cabelo, I hope you enjoy. The address is http://transplante-de-cabelo.blogspot.com. A hug.