For days now I've been writing my marathon goals post in my mind, but I keep running into the same problem: I have no idea what to do! At times I feel like I should go for broke and try for the BQ, and at others I'm feeling a little more cautious and believe I ought just to be happy to go sub-4 at this point in the year. After all, sub-4 has been the goal consuming me for the past year and a half, ever since I embarked upon my "running renaissance." But then, the ultimate goal was always to go to Boston. As you can guess, I've been thinking in circles for a long time now!

I've even been having weird marathon dreams in the past week or so. With the reader's kind indulgence, I will describe last night's phantasm, because it is just so deliciously weird.

I was having a dream about something else, which I can't remember, before it morphed into a running dream. I do remember I was at my grandparents' old house. At some point I found myself at the starting line of my marathon! Luckily I seemed to have all my running clothes on, except I realized I was only wearing one sports bra (I need two). So I ran off to the side and lo and behold I was in the entryway of my grandparents' old house again. I think I asked my mom wear my stuff was, and I found a sports bra and put it on. Then I ran back towards the starting line, but the race was just starting. I kept to the side and made it back the starting line against the flood of people and then turned around to start. So we're running, and we seem to be running through hallways and doors. It's annoying because I have to keep pushing doors open. Then I enter this room with this guy and he says I have to stop. I look down at my watch and it says 9 minutes, and I haven't even passed the first mile marker yet. There's some kind of bulletin board on the wall, and I have to do something with it before I can go on. But he won't let me do that, either. First he has to tell me some kind of story, like a parable, maybe? I don't remember anything of what he said, but I kept interrupting him and yelling at him that I'm in the middle of a RACE, and he needs to let me go! A couple of people come and go, and he lets them go on. I'm starting to get seriously pissed and I keep yelling at him. I look down at my watch again and it says 14 minutes. Finally he finishes what he's saying and lets me go. And I can't really remember anything after that.

I think the guy in the classroom was the poetry instructor from a writing workshop I took in the summers during high school. I remember we were all kind of afraid of him. Weird! Still, I hope you've enjoyed my insane marathon dream. Perhaps there will be more...

Anyone else ever have dreams where you're running, but your feet seem to be mired in something, so that you can only move in super slow motion? This happens to me A LOT. It's not the classic dream where I'm running from something and can't get away...nope, I'm just running and my legs won't work and I just feel so powerless and frustrated! I think there was some of that going on last night too. Ugh, stupid taper.

The taper does seem to be getting to me a bit more than usual, probably because I am unemployed and can either worry about that, or think about running. I usually choose running! One would think the goals are well on their way, but they're really not. I've never had this much trouble figuring out what I want from myself.

In other news, I bought a bicycle! 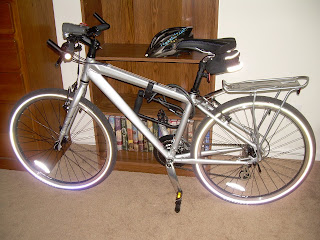 I've been drawn to bike commuting more and more lately (easy for me to say since I don't have a commute at the moment), and so has Mark (he bought one too--and he hasn't owned one in many years). But the rising gas prices are changing things. I think if they keep going up like this, more and more people will be seeking alternatives. And I want to be part of that tipping point. Bloomington is already a fairly bicycle-friendly town. One doesn't see them often out by where we live, but now that will change. :) It's not that we can't afford the gas (we still can, at least for now--and of course the bicycles themselves cost a fair amount). It's just the principle of the thing. I don't want to feel dependent anymore. And it will be nice to a little greener. We've been making an extra effort lately to be green; we went to the farmer's market this past weekend for the first time this year. First of many. Except next time we go, it will be on the bike!
Posted by Mir at 5/27/2008 11:45:00 AM

I always have running dreams when I'm running in slow motion! It's like everyone else is going by me but I just can't get my legs to move. Normally, I find myself grabbing onto anything that will pull me along... fences, tree branches, grass. So weird! Anyways, good luck on your marathon this weekend!

My running dreams often involve running in and out of buildings...and I always wonder what the RD was up to in creating such a course!!

Good luck in hitting a sub 4... my nephew and I are shooting for a sub 2 in the half marathon. The weather could be humid, might not be...hard to tell, even today, Tuesday. It will be what it will be.

I've had the dream where the race goes through a building too (and up and down stairs) Happy taper :)