Friday night saw even more storms rolling into our area, resulting in the worst flood since 1913. The devastation has been unbelievable; Martinsville, only 15-20 miles north of us, has been inundated. Ind. 37, the road we take north to Indy, was closed and although they've reopened it, there is still a detour around Martinsville. For a while I-65 was closed as well around Edinburgh. Columbus, Spencer, Paragon and many other nearby towns have seen a lot of damage. Bloomington, after the flash floods on Wednesday, seems to have been largely spared from the more widespread flooding following the Friday night/Saturday morning storms.

Some areas saw as much as 11 inches of rain (and this is on top of the long week of heavy rains we've already had). There were also tornadoes! Indiana is rarely hit so hard by nature in such a widespread area. I watched the storms rolling in with some trepidation. Here are pictures I got of some ominous-looking clouds coming in around sundown on Friday: 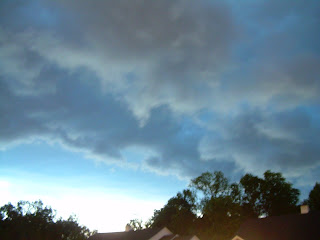 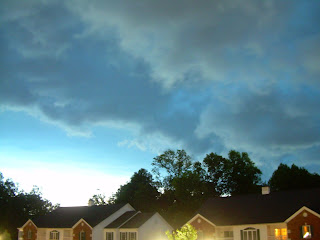 Pretty creepy. There were reports of funnel clouds in Ellettsville (just a few miles down the road), but no touchdowns in the immediate area. Further north they weren't as lucky. This is what's left of an historic covered bridge in Moscow, IN (I believe this happened a bit earlier in the week):

Many houses, farms and businesses in Moscow were leveled. :(

I don't have much extra money right now, but I will donate what I can:

If you are able, please help.

I am once again reminded that my problems are insignificant, but I'll waste a bit of space whining about myself. :) I had wanted to start running again today, but yesterday my foot felt achy. Not the pain I am used to, just a dull achiness. I did a fair amount of walking yesterday, partly on purpose because I wanted to see how the foot would stand up a little extra impact. I am hoping this is a sign that healing is in progress, but perhaps is not fully complete. It does look as though it would be smart to take some more time off. Hopefully another week of elliptical and weight training won't cost me too much fitness. If I can be healthy by June 15, that still gives me two weeks to build up for my fall cycle.

Part of the walking involved the farmer's market in downtown Bloomington, where we purchased a bounty of produce. Here is a picture of our haul, in an effort to end the post on a happier note: 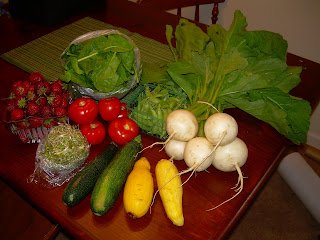 Be careful out there! Those storms and floods look nasty.

And I hope your foot feels better after more cross training. It's good that you're keeping fit.

That's so crazy, it hasn't rained here in weeks. Just hot as hell. Like 97 out there right now.

sorry to hear about the disaster. God Bless and be with you all.

Girl you just ran a sub 4 like a 3:50 marathon take easy you should still be resting.

Yeah, it's nuts for weather. We were driving on I 70 towards St Louis on Friday afternoon and saw part of that storm...wicked.

Martinsville is a real mess.

You guys really got hammered...less bad up here.

Well stated...hope you continue to heal up.

Those storms were something else! We got it too a bit north of you but not quite as bad I think.

Take some time off. You earned it. Do some light running and then hit it harder again in a week or two. Your body will thank you.

Holy crap. I'm so glad you are ok, and I'm so sorry for those who lost their homes and more. :( Scary. Take care of yourself!