As always, even after a good race, I tend not to linger long, but rather to look ahead to the next goal almost right away. I resolved to take a full week off after Sunburst to let my foot heal, so I've had plenty of time this week to think and plan; no job + no running = longest week ever. :) Cross-training saved the day beginning on Wednesday. I bike to the gym and the grocery store, and do the elliptical trainer at the gym. My main goal is to ease back into exercise while taking it easy on my foot. The foot feels fine and I'm hoping I've given it enough time. I plan to start running again on Sunday and work back up to 45 mpw by the end of June. As always, I will play it by ear.

Foremost in my mind this week has been the choice of which marathon to target for the fall. I had narrowed it down to either the Louisville Marathon in mid-October or the new Monumental Marathon in Indy on November 1. This was a difficult decision because I know people running both races and while I've heard mostly good things about Louisville, the organizers behind Monumental have a good reputation and the course looks good. Most of all, the November time frame means a greater likelihood of cooler weather, and therein lies the kicker. My last two marathons have been run in high heat and humidity. Even the one before that was on the warm side. I would just really like to run a cooler marathon. And so, I'm about 90% decided for Monumental. (Now there will be freezing rain on Nov. 1, bet on it.)

A second major consideration would be the training plan I'm following. Another advantage of Monumental is that I have a few weeks of basebuilding before training officially starts. I am thinking of joining the Indiana Running Company fall marathon training program. I need to find out more about what kind of schedule they will have, especially since I have a good idea now of what works for me. What I will likely do is join the training group and modify it as needed to include aspects of the Pfitz program that I know benefit me, namely the medium-long runs and the longer tempo runs. I would like to nudge up the mileage to a peak of 65ish (up from 60ish), and for my average to be around 50 (up from 45ish). Hopefully this will scoot the wall back from mile 23 to say...mile 26 or so. :)

I wanted to share a few pictures from the severe storms we had this week.

Water overflowing from the gutter over our deck. 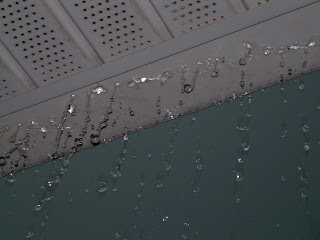 I tried to get a picture of the full fury of the storm, but of course it didn't turn out too well. But at least you get an idea of how horribly dark it was. You could just barely make out the buildings across the way when the rain was at full force. The wind and rain were roaring so loudly that I was waiting for a tree to come down in the parking lot, or else a tornado. I probably should have been hiding in the bathtub underneath some pillows. 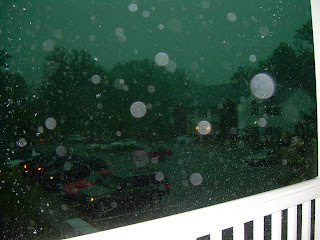 Right afterwards: some leaves blown onto one of the chairs on my deck. 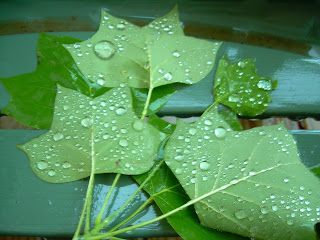 No, this is not a canal. :( This bridge will soon be restored as part of Bloomington's B-Line urban trail project. It's so sad that it figures prominently here. I hope no one was hurt.

Downtown Bloomington, right on one of my favorite running routes. It's hard to imagine how quickly this flood must have happened. They weren't kidding when they named them flash floods! Mark was driving home around this time so I was a little worried, but he took a route that allowed him to avoid the floods. It did take him an hour to drive six miles, though.

I'm certainly no stranger to flooding, having grown up barely a mile from the Ohio River, but it was a bit shocking to see these pictures of downtown. Sadly, I did read that one lady further north was killed when her car was swept into a swollen creek. My thoughts are with her family. Fortunately, I believe no one else lost their lives. I do feel very sorry for those whose cars were parked downtown. :(
Posted by Mir at 6/06/2008 11:06:00 AM

OMG :( I saw the pics on the news. That's just horrible & scary! I just told my boyfriend he's not allowed to drive to Bloomington for work next week. Hooray for choosing a fall marathon! A BQ will definitely be waiting for you in Indy :)

I'm already signed up for the Monumental Half. Hopefully I'll be at the finish to cheer you in!

I completed the Lou Marathon this past October and I really wouldn't recommend it to anyone. It was about 85 degrees and sunny - and the water stops were few and far between. Several people got really dehydrated...I was shocked to see that the race director was so careless about this issue, especially since the race was just a few weeks after the great Chicago debacle. There is zero crowd support - and the run is long and lonely. I really would only recommend it as a training run for another marathon. Sorry to be such a Debbie Downer! I am going to try out two other midwest fall marathons this year - Columbus (OH) on October 19 and Marshall University (WV) on Nov 2.