Normally I'm a pretty crappy picture-taker at races, but this time I put the camera in Mark's hands and told him I want LOTS of pictures. He had his own race, but did an admirable job of documenting the day. :)

Here is the football-themed packet pick-up at the College Football Hall of Fame. 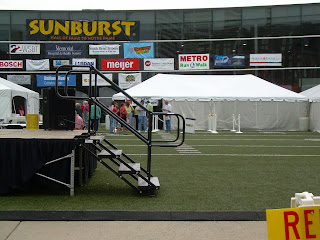 The view from our hotel was nice; we were on the 12th floor. The packet pick-up and the starting line were literally one block to the left. 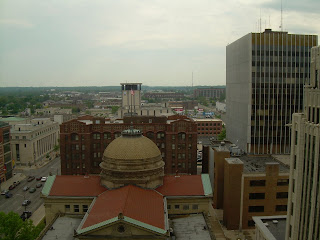 Mark was thrilled when I got up at 3 a.m. to get ready. Seriously, that gesture is secret code for "I love you!" much like "As you wish" means "I love you." Bet you didn't know that. But he was a sweetie and agreed to come down to the start with me to see me off and carry my stuff (and get some pictures). 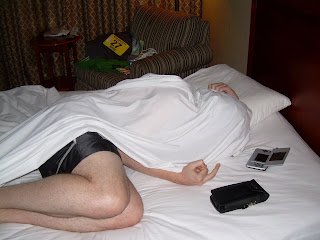 The obligatory race outfit picture. One of my rituals. I set this out at like 4 a.m. but didn't put it on until after 5. First I took the elevator down to get a feel for the weather (muggy). After that I ditched the gray tank and also decided that sunglasses would be too much trouble since it was supposed to be cloudy for most of the morning (this turned out to be a good decision; even though the sun did come out, it was never in my eyes and I didn't regret the lack of shades). 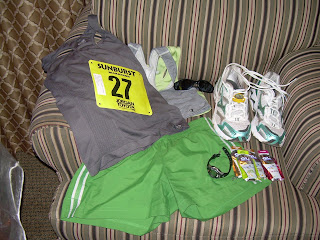 Another pre-marathon/high-rise hotel room ritual is to peek outside approximately 50 billion times. This was exacerbated by the fact that I could literally see the area near the start from the window. Mark thought this was funny. 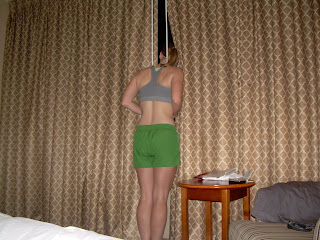 Yet another pre-marathon ritual: the applying of the Vaseline. I glopped on about a gallon of gunk between the Vaseline and the sunscreen and man, let me tell you, I was one disgusting slimy, salt-encrusted monster after that race. 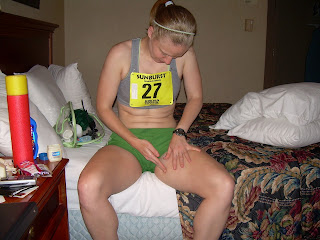 At the start. The long-sleeve t-shirt I am wearing was, even at that point, totally unnecessary. I was friggin' nervous and therefore making weird faces. 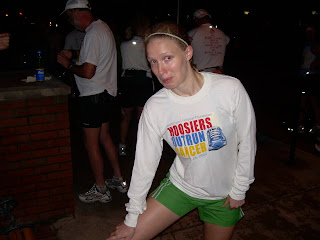 Here I am late in the race, don't remember when. I'm pretty sure it's after my foot started hurting, probably in the 17-22 neighborhood. 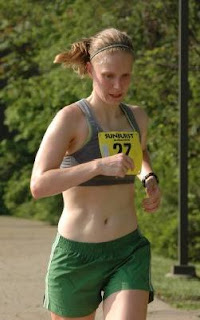 My facial expressions in these pictures crack me up. 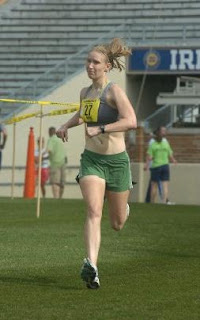 I should certainly add: Mark had an excellent race despite going out too fast and fading a bit in the heat (his race started later in the morning). His time for 10K was about 46:20 which is a big step forward for him. I predict he will be capable of sub-45, maybe even lower 40s, by the fall if he keeps up training. 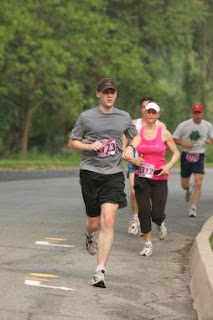 Post-race brunch. YUM. You can't tell, but underneath the layer of strawberries and blueberries, there is a thick layer of sour cream. I was in heaven. 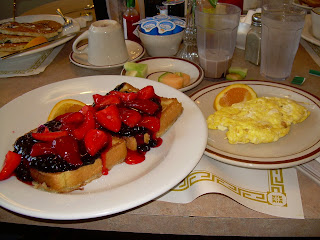 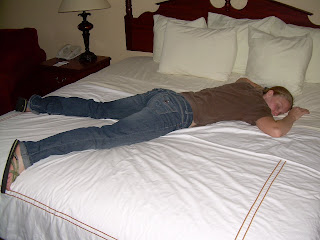 Here's a weird observation: we wear the same brand of shoes (and that's who sponsors my sorry butt), and I'm pretty sure my favorite sandals are the same ones you have on in the last photo.

congrats on your great marathon finish

Great pictures! I stared a long time at the brunch one. :) Nothing beats a good post-race brunch.

You look awesome in those pics. Congrats again on your race.

Thanks for sharing Miranda great pictures. I especially liked the last too. Some day I'll have that to look forward to.