On my fridge, I have an old one-panel comic clipping (from back in the day when I received a physical newspaper). It shows two very elderly people toasting the fact that they've finally paid off their student loans. At times, it really did feel like I would be 90 years old before the darn thing was finally paid off. (Then I got a mortgage, but that's another story.) 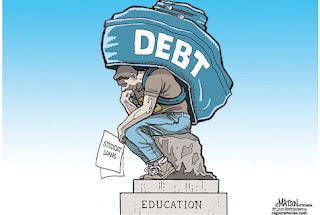 As it turns out, with persistence and a willingness to funnel my extra pennies into that loan over the years, I'm thrilled to say that I've paid off my student loan. It took me about five years--the same five years that we spent saving for and buying a house. Here's how I did it.

1. I worked my ass off in high school, earning good grades and doing tons of extracurricular stuff. This enabled me to get my pick of two colleges offering very good scholarship packages, meaning that although I chose to go to a private liberal arts college, I didn't have to take out exhorbitant loans in order for my family to afford it.

2. While not exhorbitant, the amount was still daunting. With my loans for grad school, it added up to more than I was making during the first year I was out of school and working. I looked up average loan amounts before writing this entry, and my amount when I started was a couple of K over this year's average. I'm not sure what the average was back in 2006. For my last semester of grad school, I opted not to take out any additional loans at all. I lived on ramen, worked tons of overtime, and at one point had only $20 in my checking account, but I was able to pay the tuition bill myself and squeak through.

3. I found a job during grad school that could be part-time when I needed it to be to work in around my classes, but that could give me seasonal full-time hours and time-and-a-half overtime hours during school breaks. No health insurance since I was technically part-time, but see #6.

4. Those were frugal times, but in general I live a fairly spare lifestyle. I don't give a crap about shoes and handbags. I wear clothes from Target until they wear out. I cut my own hair. I rarely eat out. I carpool or bike to work. And I've never carried any credit card debt. Also, my parents are awesome and bought me a used car when my hand-me-down Bonneville from my grandparents was worn out. I partially, but not completely, paid them back for it. They also paid for our wedding (for which I kept the expenses pretty modest).

5. I was lucky enough to consolidate my loans at a time when the rates were really low. I further lowered the rate by enrolling in auto pay and by paying my first 12 payments on time.

6. I am lucky enough to be in good health. I've had one medical incident that necessitated an ambulance trip and exhausted my high insurance deductible at the time. That was a blow, but I was able to cover it, barely. Besides that, I've never needed to deal with insane medical bills. I am also lucky enough to have only been laid off once, and to have found another job within a reasonable amount of time.

7. Especially during the first few years, I made extra payments whenever I could. This didn't happen as much while we were hardcore saving for our house down payment, but even in the past year, when we've been concentrating much more on extra payments to the mortgage, I've been putting aside bits here and there to pay down the dwindling student loan.

8. After five years in the workforce, I make about 10K more per year than when I started. I think the habit of living a fairly spare lifestyle is well ingrained. I spend a fair amount on my biggest hobby (running)--but even those expenses can be kept on the modest side by training more and racing less, and by mostly doing races close to home. My other big hobby (reading) is very cheap indeed, thanks to libraries and PaperbackSwap.

Congratulations! Having recently paid off our mortgage payment I know what it feels like! If only more people would live like you do - or at least have the same attitude towards mountains of debt - maybe this country would not be in such a big hole as it is!

Super congrats to you! That must feel awesome. I love stories about people who are financially responsible because usually I just hear the opposite from people. :-) You are a hard worker and you totally deserve all of the success and happiness you have today!

From the other side, I can tell you how much you will appreciate the eliminiation of that debt and the avoidance of the credit card debt. And to now turn that into IRA installments is even better...that money will multiply wonderfully!

Congrats...you are managing the finances well.

I would like to thanks for the information about the wedding loans
..

Thanks for writing such a good article, I stumbled onto your blog and read a few post. I like your style of writing.family loans

I have read some good stuff here. Certainly worth bookmarking for revisiting. I wonder how much effort you put to create such a magnificent informative website.dotaqq

Great info! I recently came across your blog and have been reading along. I thought I would leave my first comment. I don’t know what to say except that I have. Clean Eat Guide

I am always searching online for storys that can accommodate me. There is obviously a multiple to understand about this. I feel you made few salubrious points in Attributes moreover. stone bracelets

This is an awesome motivating article.I am practically satisfied with your great work.You put truly extremely supportive data. Keep it up. best yoga mat for hot yoga

Hi, I find reading this article a joy. It is extremely helpful and interesting and very much looking forward to reading more of your work. essentials yoga

Thanks for sharing this information. I really like your blog post very much. You have really shared a informative and interesting blog post with people. slot live22

What a fantabulous post this has been. Never seen this kind of useful post. I am grateful to you and expect more number of posts like these. Thank you very much. houses for sale in burnley

Extremely pleasant and fascinating post. I was searching for this sort of data and appreciated perusing this one. Continue posting. Much obliged for sharing.

It is imperative that we read blog post very carefully. I am already done it and find that this post is really amazing. international business funding

There are so many useful information in your post, I like it all the time. And I want to share boost app sharing with you, you can take a look. This is very useful. fastcapitalhk.com

There are so many useful information in your post, I like it all the time. And I want to share boost app sharing with you, you can take a look. This is very useful. bestcapital.hk

That is really nice to hear. Thank you for the update and good luck. lilmavs.com

It is imperative that we read blog post very carefully. I am already done it and find that this post is really amazing. jungle diamond strain

Thanks for sharing this information. I really like your blog post very much. You have really shared a informative and interesting blog post with people. Online shopping

I really appreciate this wonderful post that you have provided for us. I assure this would be beneficial for most of the people. digital marketing service

I like the way you wrote this information.
Very good written article. It will be supportive to anyone who utilizes it, including me. Keep doing what you are doing – can’r wait to read more posts. business

really appreciate this wonderful post that you have provided for us. I assure this would be beneficial for most of the people. Legal

thanks for a great site.
I have browsed most of your posts. This post is probably where I got the most useful information for my research. 35000 Psychologue