Well, Indiana Jones was wrong about them dying in Temple of Doom, and his animated gif was wrong about us dying in the Red Eye Relay. I did hit the wall after 16 of my 19 miles, but I did finish, even if it wasn't a pretty sight. In fact, during my first two legs (7 and 6 miles, respectively), I felt surprisingly good. I had done one run at 6 miles and one at 7 in the past month, and those were the extent of my "long" runs, so I really can't complain.

The pace was way better than I thought I'd manage--9:40 for the first leg, 9:13 for the second leg. The last leg was okay for about the first half--I want to say around 9:15-9:30 pace, and then I simply hit the wall. Even with walking up the hill on  Boltinghouse, I was still averaging 10 minutes per mile at the top, but I was finished after that. I don't know my final time because I didn't stop my watch when I finished. I'm not concerned about it--I eked out a WAY better performance than I thought I was capable of, especially with the excessive heat warning. In the end, all I promised to do was physically cover the distance, so I think I surpassed that!

Mark ran as well--he had a total of about 14 miles and ran all three of his legs solidly, despite the fact that he's been running even less than me.

Should you ever run this relay, I highly recommend TRAINING FOR IT. It's far more fun and you notice the hills far less--meaning you can enjoy the beautiful scenery and camaraderie of your teammates that much more.

Here's a few pictures from my first leg, taken by my teammate Maggie: 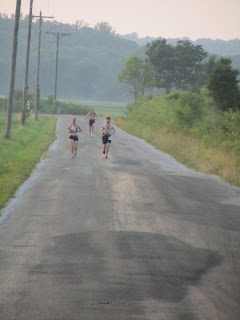 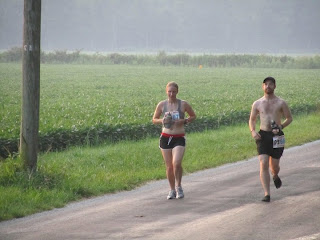 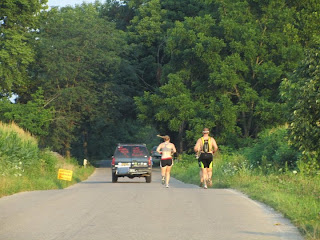 At this time (about 8:00 p.m.), the air temperature was still 88 degrees and the dewpoint 72. I don't remember the heat index, but I probably don't want to know. The people running earlier in the rotation certainly had it much worse, and in many cases, had much less shade.

So what now? A few days off from running, for sure. Maybe more, but I'm so annoyed with myself for doing this while undertrained that I might be motivated to get back into regular running. I'll play it by ear, as usual.
Posted by Unknown at 7/25/2011 10:57:00 AM

I did my first relay this past Feb and it was so much fun! I can't imagine having to run in the middle of the day in this weather, though. Bleh. What's up for you, racing wise?

Ps. and I think I lost your blog for awhile, but now I have it and linked it to mine. :)

Great job keeping up the running Miranda! I know it seems twice as hard in the heat, and those are some long stretches of relay miles. This sounds like a fun challenge though, I'll have to try a relay sometime too.