The garden is off and growing.

The floor is getting most of the love these days, but we're not neglecting our vegetable garden. All of the plants I started indoors are now out, and look like they'll survive despite the fact that I was stupid and didn't harden them off enough before transplanting them. (That's when you take a seedling you started indoors and put it outside in its container for a few hours at a time, letting it ease into more harsh outdoor conditions and more direct sunlight. If not, the plant can suffer from sun scalding, which turns its leaves white and could kill it.) My tomato plants were looking a little rough for a few days, but they're all showing new growth so I'm hopefully they'll pull through.

I made some improvements to my set-up this year. Really, I should say Mark made them, literally. 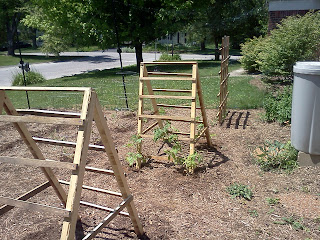 That's right, he's built me garden trellises out of scrap wood we had lying around. Three are complete (one ladder-like one for peas and two A-frame ones for cherry tomatoes and zucchini), and two more are on the way. 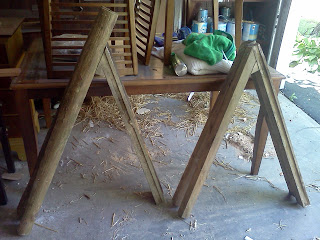 I'm impressed with how they turned out! How handy is that guy? I just showed him a couple of pictures to give him an idea of what I had in mind and he did the rest. I got the idea of the A-frame style from Pinterest. Last year I used regular tomato cages for my cherry tomatoes and they basically kicked its ass. So, something much more sturdy and stable was in order. I'm thinking they'll also work well for zucchini, cucumber, and melons, the latter two of which I still need to plant. I'm excited to see how it goes.

I'm sticking with the old standbys in part, with the tomatoes and zucchini and also broccoli and bell peppers. And, of course, my three herb faves: basil (there can never be too much), parsley, and dill. 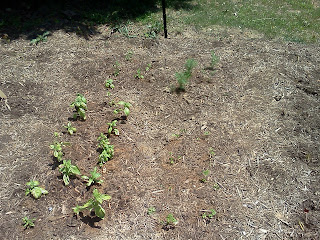 But I'm also trying some new things, including spinach, lettuce, beets, and potatoes. The spinach is up and I need to harvest some already! The lettuce that I planted awhile back never did anything, so I tried planting more. I know lettuce is more of an early spring crop and this heat we're getting probably isn't going to be great for it, but I thought I might as well.

We've found the eWallets STICPAY and MuchBetter to be the most effective fee strategies for players in South Korea. More well-known devices like Skrill and Neteller are also choices. PayPal became more restrictive in some markets as they 온라인카지노 have entered the Cryptocurrency market - but that might change. Live games are streamed from dedicated studios and immediately from terrestrial casino floors all over the world. Those who select to gamble on-line need as a lot data on their facet as possible.