How I moved past my DNF

Last weekend, I DNFed a race for the first time ever (unless you count getting sick after my second leg of the Red Eye Relay in 2007, which wasn't really the same thing). 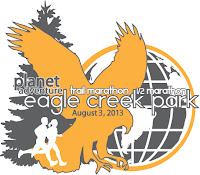 I went into the Eagle Creek Trail Marathon thinking I would basically treat it as a really long long run and planning on walking as much as I needed to. I had a couple of solid long runs under my belt, but had a hole in my training starting from vacation in Maine/Acadia in early July and then for a week or so after. I didn't pay much attention to race prep during the week leading up to the race, but I did make an effort to eat/drink well the day before.

I had a bagel with peanut butter for breakfast on race morning. It was just under 70 degrees, with a dewpoint of 67 and 93% humidity. Better than usual, in other words, but still pretty yucky. I carried a handheld water bottle for sipping between aid stations. I also had two gels and was ready to eat a third, and I partook of the sports drink they provided at aid stations. I felt fine through the half, though I noticed I was sweating excessively (for me)--my clothing was completely soaked through and dripping. 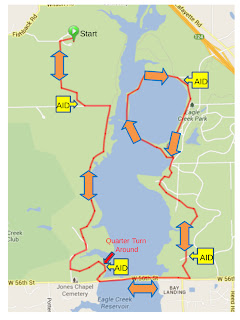 I ran like it was a regular trail run, taking it very easy. Compared to the trails I'm used to, and the one trail marathon I've done (Tecumseh), the course was extremely easy, with a few short steep hills and no sustained climbs. The challenge was in the mixture of surfaces--single track with log hurdling and lots of roots (very tricky on tired legs!), gravel (although ground in so not bad at all), and road sections. There was also the mental challenge of the format, a double loop out and back, meaning we ran out and back, ran through the finish line, and then went back out to do it again. I didn't mind that and found it helped me break up the race into manageable chunks. Since large parts of the course had two-way runner traffic with a wide range of paces as half marathoners caught up to marathoners, being alert and ready to yield was a must. I noticed quite a few runners wearing headphones...not smart.

At around mile 15, I began to notice that I wasn't feeling quite right. It's hard to describe. I just felt...off. Normally in a marathon, it starts to feel hard to hold your pace if you haven't trained enough or if you've gone out too fast, but you can hold on for a while, or if nothing else, stick it out by slowing down or taking walk breaks. It certainly doesn't feel in any way good, but it's the pain of fatigue and sore muscles, and can be dealt with. This was different. My legs still felt pretty good. Usually on a trail run I might recharge by walking up a hill and running back down, letting the momentum carry me for a while. But even after taking walk breaks, I wasn't feeling any better. In fact, I was feeling progressively worse.

By 17 I wasn't running at all. Even walking was difficult. I kept stopping and bending over--not terribly out of breath, just not feeling well. I was starting to feel lightheaded. I've struggled through plenty of tough marathons, but nothing like this. I stopped my watch and started looking for an opportunity to step off the course. A couple of other racers stopped to walk with me, and I've very grateful to them for making sure I was all right. Before too much longer, we came on a road crossing with a volunteer, who was able to arrange a ride for me back to the aid station where Mark was spectating with the dogs.

I'm not sure what happened, but I'm inclined to think a variety of factors being a little less than ideal contributed to it, rather than any one thing being very wrong. You can bet I've been monitoring how I've been feeling very closely since then! But I put in a good week of running, including 4.5 miles the very next morning, and felt nothing more than the normal fatigue one would feel after a 17-mile long run.

A few years ago, I would have been reliving every moment of the run and berating myself for "giving up." But now, truly, I don't feel very badly about it. I did have some twinges when I saw my race photos, and photos of other people finishing. But one nice thing about having been a runner for so long (17 years or something) is that I recognize one bad day, or even a bad race, doesn't define me. The best thing I can do is take what lessons I can from this experience and move on to the next run. I think that attitude works for life in general as well. 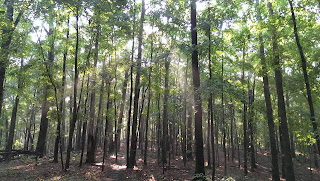 To illustrate, yesterday I got a piece of trail revenge by running 22.5 miles on the trails of Brown County State Park. This was a tough run too, with similar conditions as a week ago and considerably more climbing (Garmin recorded 2,500 ft, which I'm sure is inflated--but it was still a lot)! I even had my first real fall since taking up trail running. This happened around mile 10. I scraped some skin off my leg and jammed my forefinger, but still finished the run okay. I went through my water a little faster than I thought I would, so I had be very sparing with it during the last six miles or so. Even with all of this, I felt normal.

Hopefully, I'll get more revenge later this month at my next race, the Hood to Coast Relay. And perhaps I'll finish my business at Eagle Creek in 2014 as well. Anyone else have any good (or should I say bad?) DNF stories to share?
Posted by Unknown at 8/11/2013 12:47:00 PM