Ever since Hood to Coast, I have been struggling through an especially deep motivational rut. I was putting in some really solid training up until then, and after that it just fell off. These days I'm running a couple of days a week, maybe 4 miles at a time. So I was completely unprepared coming into the Bourbon Chase last weekend.

The biggest problem with this was that in a flush of confidence, I'd told our team captain months ago that I could take on one of the longest/hardest leg positions, and that I'd probably be good for about 8:00/mile. So he gave me the longest set of legs, comprising 19.5 miles, and put me down for 8:00s. This would be have been fine if I'd just kept up some solid weeks of 40ish miles per week or more, but instead I sank into a weird funk and it was probably more like 10 or something. At the end of September I did a half marathon in about 1:48 or 1:49, still benefiting from the base I'd established through August. That's been about it. 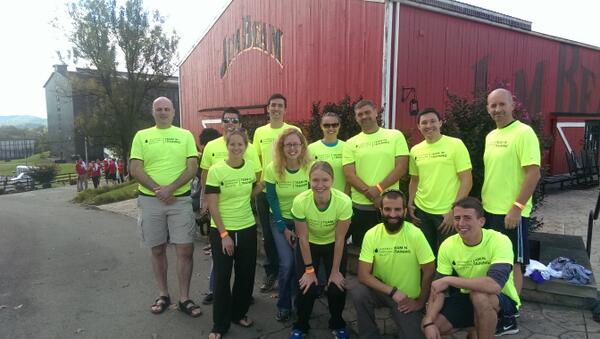 But the Bourbon Chase is about a little bit more than running. It's about meeting new friends, spending time with friends new and old, and enjoying yourself. Our team is not terribly competitive; the only real goal was to stay close to or beat our projected time. Due to some sort of snafu with the times, we'd been given a relatively late start time of 3:00 p.m., but no one really worried about being much slower than projected because usually people get caught up in it and run faster than they predicted.

I was running fourth for our team, the Bourbon Legends, meaning I was in Van 1 for the first time. I've done the Bourbon Chase twice before, both times in Van 2, so I was excited to see some new scenery. And on Friday evening it was very nice indeed. Low 60s, sunny, the sun starting to go down, rolling hills, beautiful Kentucky countryside. My first leg was also the shortest, at 5.2 miles. I wasn't expecting to hit 8:00s after two months of practically no running, but I was very pleased with 8:20 pace (and it would have been 8:10 without the final hill of death).

As a group, our van picked up about 10 or 15 minutes against our projection, so we were feeling pretty good about things. After we finished our first shift, we went for dinner at The Hub in Danville, where I had an awesome breakfast burrito and cider chai. Since I have a history of stomach problems during relays, I was ready for any signs of issues, but I was feeling pretty good. After dinner we went to the next major exchange and had a nap before we were due to run again.

Then we got word that after a strong start by Van 2 runners, one of them had gotten lost during his leg. He apparently ran 6 MILES off course before someone pulled over and gave him a ride back to the course. Luckily (except for him, I guess!!) they were six fast miles, so the time loss wasn't what you might think. He did end up accidentally running considerably more than anyone else over the course of the Chase. So anyway, now we were down by about 20 minutes, putting us at a finish just after 8:00 p.m. on Saturday. We really wanted to finish before 8:00, preferably close to 7:00.

I'm not sure what happened--a turn not marked very well? Maybe a sign got flattened or knocked over? Usually the turns are very well marked (the Bourbon Chase benefits from very tight organization).

Van 1 started our second shift on fire--we were determined to erase that deficit. I still couldn't get down to 8:00s on my 6.5-mile second leg, but I did manage 8:18s and only lost a couple of minutes. The second leg was not as hilly; much of it was on the highway. It was a beautiful, moonlit run. After some really awesome running by the van overall, we evened things back up. And Van 2 got us ahead again. 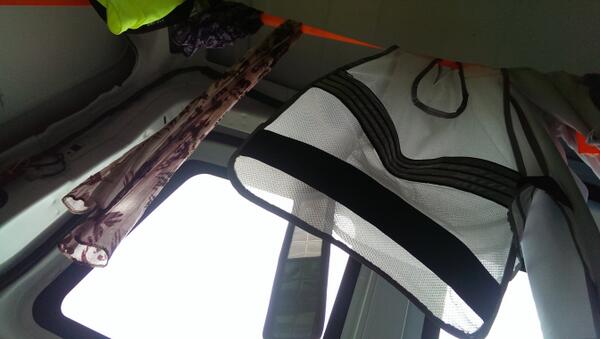 After my second leg, I was cold. I put on all the layers I could find and wrapped myself in a sleeping bag, and it still took quite a while to warm up. We got some more food and then headed to Four Roses to wait for Van 2 again. My stomach was a bit off, but not bad, after a walk around and a bathroom trip, I was not feeling bad at all. I ate most of a blueberry muffin and kept sipping water. By now it was light again and we trooped down to the exchange. The weather was now becoming an issue. It had clouded over during the night and now started to rain lightly. It wasn't really warming up at all from the overnight temps of mid-40s.

The rain got heavier and the wind picked up as the time approached for me to tackle my last leg, which was the longest and most difficult at 7.8 miles over some serious hills. I knew I'd get through it somehow, but I was really worried about hanging on to any kind of pace. That 8:00/mile projection was hanging like a weight around my neck. Just as our runner rounded the bend to hand off to me, an especially hard gust of wind blew the exchange's shelter canopy over, and I thought, "This is going to be bad."

For about 4 miles, I held on to 8:20-8:30 miles. I'd decided to go fairly minimal on clothing since it was pouring down rain and running in wet, cold clothing is generally worse than running in wet, cold skin. I'm not sure what I could have done differently, but I was cold the whole time. Never really warmed up at all. Maybe even wet gloves would have held in some heat; going without was probably a mistake. Still, my arms, with arm warmers, were a lot colder than my bare legs. Every gust of wind (into my face, obviously) was a fresh misery. By mile 5, I was really struggling, and I couldn't hold on to my pace on the hills. I'd try to get some momentum going on the flats and downhills, but there didn't really seem to be many of these. By the last mile I was shuffling along, just trying to keep moving and not walk. 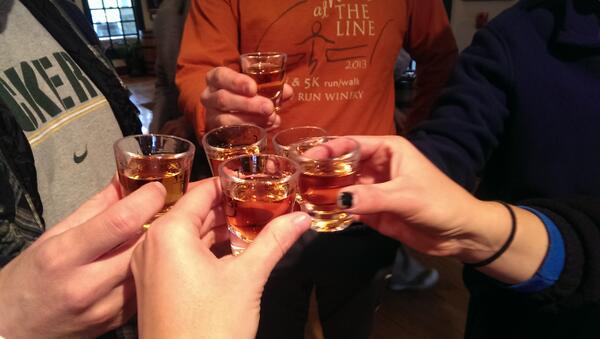 At last I stumbled to the exchange and immediately sat down. I literally couldn't feel my hands--one of my teammates held them in his until they started to burn, and then one of the volunteers let me wear her fleece gloves for a few minutes, and I started to feel better. I lost us quite a bit of time on that leg (I still haven't really looked at my pace--I really don't want to know). But at least I got through it and we still had solid chances to make the time back up. I'd handed off to Aaron, our team captain, who put in a truly awesome last leg, running over a minute per mile faster than his projection. Our van finished up at at Woodford Reserve. That was about when it stopped raining, OBVIOUSLY. 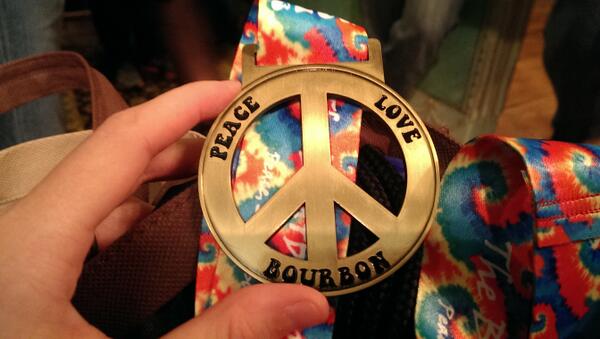 We ended up beating our projection by 6 or 7 minutes. We made it in a little after 7:30 p.m., on the tail end of things, but still in the thick of it, to judge by the ridiculous overcrowding of the bourbon tasting tent. Despite a hot shower, I was never able to warm up again after my last leg. I wore all my layers, mittens, and a hat and was shivering and cold the entire rest of the night. The only warm place was the bourbon tent and it was awful in there--shoulder to shoulder people, stuffed full, and very, very loud. I don't do well with crowds like that, so I was happy to get out of there even if it meant being cold again. I really wish they could devise a way for everyone to enjoy their bourbon tasting in a slightly more pleasant atmosphere.

Still, hot soup at a very cool restaurant called Shakespeare & Co. fixed me up, and a warm, dry bed righted all wrongs. The next day, it hadn't really warmed up much, but the sun was out and that sure made a difference! It was time to bid friends new and old goodbye and head home. Next year, I should really train!! One of these years I want to average sub-8:00 for Bourbon Chase.
Posted by Unknown at 10/25/2013 10:49:00 AM

You have done a good job with your knowledge that makes our work easy because you are providing such good information. Keep sharing this kind of knowledge with us. best bourbon whiskey for sale online

The very elegantly composed article that you have given to us about it. Continue imparting your insight to us, Much obliged. cocktail making party