Fall weather has (sort of) arrived, and that means my favorite running buddies can come out to play. 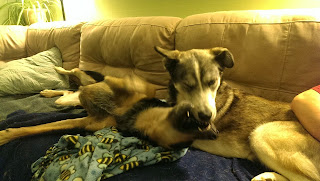 Both Rudy and Arya have heavy coats that make it very uncomfortable for them to run in warm weather. Even our recent days of 70ish-degree highs are a bit on the warm side, though tolerable, and the mornings are very nice for them. What they really like is actual winter, but we're not there yet. I remember Rudy's first winter with us, when I worried that 20 degrees would be too cold for him, so I took him on a short loop, intending to take him back if he showed any discomfort. I stopped worrying when he started rolling in snowdrifts. And of course Arya a.k.a "Winter is coming" is even more suited to the cold. I'm sure there's a point where it would simply be too cold for them, but I'm fairly certain I would reach that point well before they do. The coldest air temperature I've been out running in recently is right about zero (with windchill below that), but that was a few years ago, and it doesn't tend to get that cold around here anymore, at least during the day. 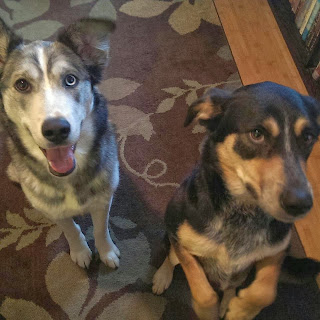 It's rare that I get them out to run in the summer. Of course, they don't know that, so when I'm getting dressed to run, they stand by the door patiently, waiting for me to put their harnesses on and take them along. And, OH, the guilt trip they lay on me when I close the door on them! I've been dealing with these faces for months!

But when I do take them running, even worse is the moment when I have to decide which one gets to come with me first. Running with both at the same time is inadvisable given that their combined weight is nearly equal to mine and when they take it into mind to chase a squirrel, well, that's where we're going whether I like it or not. So it must be one at a time. This is a good thing because it helps me get in more mileage, but of course dogs do not understand the concept of taking turns, so if I hook up Rudy and take him first, Arya tries to door dash to come with us and when she can't, she realizes her world has ended and, crushed by betrayal, she runs around the house howling her despair.

If I take Arya first, Rudy sits nicely while we leave, but gives me the full blast of his mournful "Woe is me" face. Then he runs in circles around the house, whimpering and whining.

Oh, but no one lives in the moment of a good run better than a dog. The first quarter mile is always spent braking to hold back from an all-out sprint. I'm pretty sure their thought process is something like this: "OMG OMG WE'RE RUNNING LET'S RUN FAST FAST FAST FASTER OMG THIS IS GREAT SQUIRREL OH WELL SQUIRRELS ARE STUPID OOH I HAVE TO POOP MUST BURY POOP OMG RUNNING LET'S GO WHAT ARE YOU WAITING FOR HEY A MAILBOX!"

After a while they settle into a nice even lope. Rudy likes to visit mailboxes often to let everyone know he owns them, but Arya stays moving and almost never stops even to sniff. Rudy is better about running at my side and a little to the front. Arya is improving but she still tends to weave around and get underfoot. They're both natural runners, though, and their excitement is infectious. More than once I've gotten home from work not thinking I'd be able to muster the motivation to run, but one look at their eager faces and I think, well, maybe a couple of miles.

I find myself actually looking forward to winter running this year. I hope that feeling lasts past December!
Posted by Unknown at 10/15/2013 10:30:00 AM