A change in mindset

I've barely touched this blog lately except for an occasional race recap. But I think I want that to change because pretty soon, I'll be gearing up for my first 100 mile race, and I want to document the hell out of it. I'll put it out there because why not, but mostly it's for me. As I get older, I find myself wanting to look back and inward. I wish I had more from the really early days of running--high school and college XC, training for my first marathon, etc. There's a little bit, but basically anything before I became active on social media is pretty spotty. One thing to be said for social media, whether you like it or not--it sure does make it easy not only to document things, but to be able to find them later. This will be a hell of a journey, and it will be one I want to revisit later. And who knows? If others find it useful, awesome! 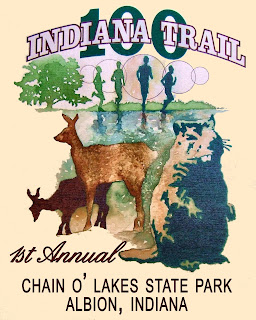 Okay, SO: the race is the Indiana Trail 100, April 30-May 1, 2016. I chose it because as a lifelong Hoosier, doing my first 100 in my home state is important to me. It's also going to be a place where I can count on a lot of "hometown" support, and if there's one thing I've learned about ultras and especially 100-milers, it's that it would be impossible to do without support. It's now in its fourth year, and already gaining a reputation for great volunteers and support. Thirdly, a not insignificant consideration: it's relatively flat, and having paced and crewed there, I have some familiarity with the trails. No 100 is easy, but it's more manageable than some. I've seen firsthand how it can still be VERY challenging as a result of weather conditions, but of course that can happen anywhere.

Goal: To finish. I'd be lying if I said I wasn't going to shoot for 24 hours, which I think I can do as long as I'm healthy and conditions are good. I need to have something in mind. But as long as I can cross the finish line in fewer than 30 hours (the cut-off), I will count it a victory. One hundred miles is an awfully long way, and the list of things that could go wrong, changing a good day to a bad day, is long as well. With a good crew, a good pacer or two, the ability to stay optimistic, and LUCK, I feel like my training will get me there.

So all I have to do now is train. That will be the real journey. In a way that started awhile ago. But now, with 24 weeks to go, it's time to start shifting the mindset from "Hey, just kinda running a bunch and doing some races" to "How will this benefit my overall goal of finishing 100 miles?" I do still have a couple of races planned for this year (this weekend's Flying Monkey Marathon [for funsies] and the HUFF 50K in late December [will race this one]), as well as one that I'm thinking about for late January (Mountain Mist 50K), and the Land Between the Lakes 50m in March. But these are secondary, and I'm absolutely not adding any more; I want to concentrate on long slow distance as much as possible, not to mention staying injury free and healthy.

As usual, I'm not following a set plan. I've looked at a few training manuals to give me a bit of a framework to work from, but mainly I'm going to rely on the advice/examples of friends and take it week by week. My overall aim will be to run a lot and slow down (which is more or less what I do anyway). I do want to keep in some speedwork, but it will be a small slice of the pie. It's going to be a lot of trail runs on the weekends, and a lot of headlamp miles on weekdays.

For the moment, I'm looking forward to Sunday's Flying Monkey Marathon. The weather looks promising and Mark is planning to come along and bring the dogs. I don't have any sort of plan for this one--just gonna start running and see where the day goes. Just a completely no-pressure, bonus race. The event is kind of an interesting one, and I've wanted to try running it for years. It's capped at 300 people, and registrations are only available via lottery (or a sizable donation to the park where it's held). It's billed as the antidote to the glitzy road marathon culture that's gained steam recently. No timing chips, cheerleaders, bands, certification. It's as hilly as they could make it, with 3,600 feet of gain on a road course in Percy Warner Park in Nashville, Tennessee. It's just some folks getting together to run, eat food, and drink beer. That is, it sounds awesome, especially after my recent frustrations with the Indy Monumental half, and about as close to a trail race as you can get and still be a road race. I didn't train specifically for it (I'm told it's impossible to train for the Monkey), but I expect my solid base to get me through. I'm sorta kinda tapering (by tapering I mean still recovering from the last race). Not really going to worry about it. Can't wait!
Posted by Unknown at 11/16/2015 05:28:00 PM

When working at greater spindle speeds — more than 20,000 rpm — it is advisable to have the software holders balanced as a whole meeting, making certain that the cutting software and retention knob are put in. All machines have entry to massive range|a extensive range|a extensive variety} of tooling and all machines are fitted with Renishaw Probing. The HMC model of a CNC turning middle incorporates a horizontal spindle that lets you speed up your manufacturing course of and ensure would possibly be} not|that you are not} interrupted. For occasion, the orientation of HMCs permits chips to fall away naturally, so that you don’t should waste time clearing them off the table. For maximum efficiency, you can to|you probably can} even arrange an Stephen King books HMC on a pallet whereas loading work onto a separate pallet. When designing 3D CAD components would possibly be} going to be CNC programmed using CAM software, quantity of} guidelines or pointers may be followed to permit the part to be machined on a CNC machine.