This week has been a pile of crap for many reasons, but there were a few glimmers of positivity going on in the background for me. Here is one.

One neat thing about living in a big university town is the occasional opportunity to participate in research studies. I've done this a couple of times before, usually in return for a Target gift card and maybe some cool data. For the last one I got free VO2 max and body fat % tests. Now I'm doing another one for a study at the biomechanics laboratory at the IU School of Public Health, this one much more long term than usual; I'll be wearing a FitBit (which I get to keep) for a year and uploading my data. I also have to keep track of my running, which I do anyway, so it's no real chore.

I went in for the initial paperwork and gait analysis last week. This was actually quite an involved process. I received a survey to take home and then we proceeded with the gait analysis. They analyzed four paces: preferred running speed, baseline running speed (same for all subjects), preferred walking speed, and baseline walking speed. This involved walking, then running, along a raised runway, about ten meters long, in the center of the room. Then, and this is the supremely cool part, I was fitted with motion capture markers on the lower half of my body and filmed while running and walking at each speed. I lost count of how many times I ran and walked that ten-meter length. If you've ever seen behind-the-scenes clips of Andy Serkis playing Gollum in Lord of the Rings, or the folks playing the Na'vi in Avatar, that was exactly what it was like--it's the same technology (except they stuck them on me with duct tape instead of having me wear a full body suit). 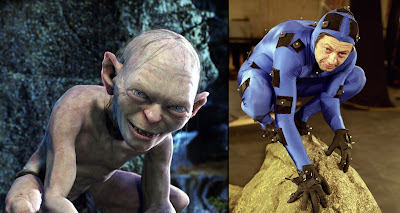 Afterward I could view the collection of dots that represented my legs in the act of running. Instead of animating those dots into a space alien, they'll use them to analyze each subject's gait. Neat!! I wish I'd gotten a picture.

I took the survey, which is pretty exhaustive, home with me to fill out. Filling out the survey was interesting; it basically forced me to reflect back on my entire lifetime of fitness--not just the daily running I do, but things like ice skating when I was a kid, or kayaking, or intramural soccer in college. I was asked to list all the running shoes I currently wear, as well as my complete race history for the past five years. That time span reaches back to the very beginning of my injury and ensuing mental funk, so it was bittersweet to reflect on all those races. I also realized that my running of the Boston Marathon was more than five years ago--shit. But it's actually a positive feeling too; I've changed since then and in a way, the races, distances, and times reflect that. 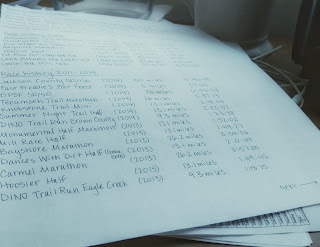 I've been running since I was 14, more than half my life, so there was a lot to put down; it took me an entire hour-long lunch break to complete. I had to refer to Athlinks to get my races and times. There's no way I could have remembered them all! And I race far less often than many other runners I know. A lot of things that seem to loom very recently are actually further in the past than they feel--the assault, for example, will be fully seven years ago in December. Others seem like they happened just yesterday, but I was surprised to see they were actually more than two or three years ago. It's strange how things have coalesced in my memory. Running has been a constant in my life for so long that it's often how I measure the passage of time, but like any measure of something as mysterious as time, the numbers only mask something deeper and less quantifiable. Pretty deep thoughts for a lunch break! 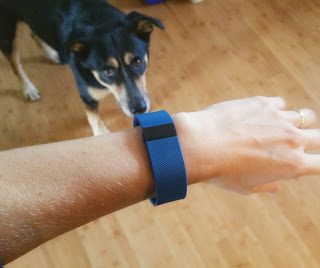 I received the FitBit yesterday. It will be interesting to compare the data it collects with my running stats, and also to look at things like how much I sleep (the sleep sensor may be the feature I'm most interested in). Right off the bat, I'll be able to look at data for a marathon--Flying Monkey is this Sunday!

I believe the study still needs a few more people, so let me know if you're local and interested in participating and I can pass on the info. I believe the only criteria are that you should run 10 or more miles per week on average and cannot have had surgery to your legs/back. The study is investigating whether nonexercise physical activity and the amount of rest you take contribute to the risk of developing a running-related overuse injury. The professor in charge of the study has been plagued with injuries, with numerous surgeries, and it sounds like this study has a personal note for her. It sounds interesting and I'll be eager to see what they come up with.
Posted by Unknown at 11/20/2015 02:04:00 PM

To play Craps, one individual is the shooter , and the other players place bets on the outcomes of the roll. The shooter can win if they that they} roll a 7 or 11, but if not, the number they roll is now the “point.” The shooter has to match that time before rolling a 7 to win. If you aren’t the shooter, find a way to|you possibly can} place a 점보카지노 guess on whether or not or not the shooter will win. "You are someplace between forty four percent to 48 percent in every single hand of successful," he mentioned, noting that no different on line casino recreation provides you odds that good. Blackjack has the most effective odds of successful, with a home fringe of simply 1 percent in most casinos, Bean mentioned. Now, think of yourself strolling into a on line casino with the sensation that you’re going to beat these odds outcome of|as a end result of} luck is on your aspect.