My goal time was 32:00, or 8 minute/mile pace. Having run this course a month ago in its 4K layout, I knew the first half was mostly downhill and flat, and the last half was mostly uphill. I decided to just run comfortably hard and try to coast along for the first two and then just see what I had left after that.

It was a beautiful day, if a bit cold (29 degrees). But the sun was out, it wasn't very windy, and I was feeling pumped, so I opted for shorts and my new black tech tee that I got on sale at Dick's. =) Here I am in my super-cool stealth runner mode: 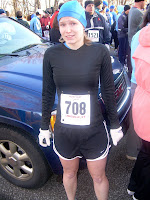 I think there were maybe three other people wearing shorts. I felt hardcore. Although I did see one lady (who passed me) wearing thin cotton pants and a sports bra. Her shirt was tied around her waist. That was a bit much for me. The first mile felt effortless. Split was 7:12. Ooch. A bit fast, but time in the bank. Okay. Second mile also felt really good, but slowed up a bit, 14:55. Would have liked to see 4K split to compare to last month, but GPS couldn't find a signal for most of the race. I think it must have been around 19:00 or so, maybe a bit under? Excellent. Starting to feel it, but still good. Start hitting the hills. Time at 3rd mile was 23:01. I'm thinking 32 is in the bag; I could break 30 if I just run a 7 flat mile, ha, ha, ha. Not likely on those hills. Up hill, brief flat area, down slightly, back up around statue of someone or other (horrible that I have no idea, really--probably George Rogers Clark or something--I should look it up). Last half mile or so is completely uphill, and it's no sissy hill either. I still had some gas, so I worked the hill pretty well, but fell off a bit near the top. Managed to sprint in. Gun time was 31:16, net time about 31:12. Mile splits were 7:12, 7:43, 8:06, and 8:11. Average of 7:49. So basically I ran too fast my first mile, then held to my goal of averaging 8 minute miles for the last three miles. Ha ha. Still, especially with those hills, I was very pleased with my time. I think my goal for the 5K on Feb. 10 will be to hit 23 (meaning I'll have to cover about a tenth more in the same amount of time as today).

I was in a new age group today because I turned 25 yesterday. Man, this age group is way more competitive! I would have been 2nd in the old one, but I was 4th today. Eh well. Probably would've gotten a $10 gift certificate to Fleetfeet or something, which would be enough to buy the sleeve off a tech tee there. I'll stick with my clearance rack at Dick's, thanks. =) Now it's time to get pumped for an 11-miler in the snow tomorrow!
Posted by Mir at 1/20/2007 01:36:00 PM