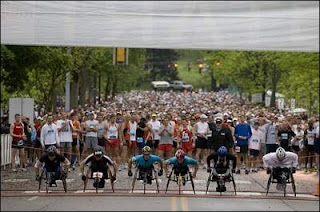 First I want to thank those who are keeping Nana in their thoughts and prayers. We are all trying to face reality at this point; it doesn't look like she is going to get better. We're concentrating on making sure that she's comfortable and getting some peace and quiet, and that she has someone available to keep her company when she needs it. I hope to be able to see her today. I've decided that since I don't have a job right now, I'll stay here at my parents' and help out however I can for a week or so. Mark just left to head back up to Bloomington. I'll miss him, but I'm glad I can help my family. I don't think all of this has quite sunk in yet.

Even though it's somewhat overshadowed, the race went incredibly well. There were a couple of points in the later stages when I really wanted to give up, but I kept thinking, this is the race I'm running for Nana--I have to make it a good one. And I did...it was one of the best I've ever run.

We went out to dinner at a place downtown called Bistro 301. It was very good, but they were of course super busy and unfortunately short-handed that night, so dinner took quite a longer than I thought it would. After we got home, Mom and I talked awhile and I went to bed around midnight. I recorded four hours of sleep in my log, but I felt like I didn't get any. I lay there and listened to the rain for what seemed like hours. It rained much of the morning but had let up by the start. It stayed overcast and ~55-60 degrees, with a little wind, for the entire race. Perfect!

The alarm went off at 4:30 and we got up and got out the door a little after 5. After a stop at Kroger to pick up bottled water to take on the shuttles, we drove over to Louisville and parked in a garage just off Third Street. We boarded a shuttle around 5:45. We had gotten well underway when Mark realized he still had his glasses on. He never runs with his glasses, and by the time we arrived at Iroquois Park, he decided to risk riding back to the finish and dropping off his glasses at the car and hoping to catch another shuttle.

I set off on my own. After a bathroom break, I walked down towards the start and almost immediately ran into one my friends from grad school, Ben. I hadn't talked to him in a few years, so it was great to catch up. This was his first mini and his goal was 2 hours (I looked him up later and it turned out he ran 2:00:xx...great job Ben!).

We went our separate ways and I went back for another bathroom break. I had stopped sipping water at 6:30 (which worked perfectly...I didn't feel one twinge from the bladder during the race). The line took a while, but finally I went about 15 minutes before the start. I jogged around near the starting corral for a few minutes to warm up, then squeezed in just ahead of the 8 min pace sign. It occurred to me that I could follow the 3:30 marathon pace leader for the first 12 miles, which would be especially during the tough hills in the first half of the race.

Moments before the race began, I shed my throwaway long-sleeve t-shirt. I wore a fitted black tank top and burgundy/pink Nike Tempo shorts and felt cool but comfortable.

I knew this would be slow--there are 12,000 people in this race and a lot of them lined up way too far to the front. But I was right with the 3:30 pacer, so I knew we would make the time back up. The first part of the race winds around neighborhoods near the park before entering it, so there were a few turns to negotiate in the press of people.

That's better! Now I felt good because we were about even on my main goal pace. The thing about this course that can make it difficult is that it's hard to settle into a rhythm for more than a couple of miles at a time. The first test, the park, was coming up.

Iroquois Park: beautiful but deadly! These hills are tough even by my standards, but since they come early, they don't usually affect me too badly. Today I was feeling them, but they didn't slow me down too much. Miles 4 and 5 were the two hilliest miles. I was passing a lot of people going up those hills and coming down them. I began to assess how I was feeling. I knew at that point I wasn't having the kind of day I would need to run away with low-1:40s time, but I knew my main goal of 1:45 was there for the taking. I felt like it would be all right.

Cruising downhill out of the park and back onto city streets is definitely one of the highlights of this race. You're almost to the halfway point, and coming down the hill you can hear the cheers of crowds gathered at the park entrance before you see them. It definitely makes for a big boost, hence the quicker mile split.

Miles 6-8 are one of the sections where you can really get in a groove, and I was feeling pretty strong clicking off the 8's. I passed 10K in 49:26, which is actually only a minute off my current post-college PR...just goes to show it's time to find a 10K to race.

Second-slowest mile of the day...this is where the course takes a detour through Churchill Downs. This is a new addition since I've run it last, and it was harder than I expected. There's a ramp down underneath the track, then a short tunnel, then a ramp back up. This first one wasn't bad, but it was hard to gain any speed in the constant twists and turns that followed. Then we left the infield and went down and up again. This ramp was longer and steeper and my legs felt like Jell-O. I finally slogged to the top.

After the track I struggled a little. I thought of Nana a lot and how I wanted this to be a good race for her, and I could still break 1:45 if I could just keep it up. I passed 15K in 1:14:38 and realized I was still on pace. This gave me a boost and I kept on, although I was starting to get pretty tired. My split at 10 miles is a new PR by several minutes.

By far the hardest section of the race for me. This is a long straight shot up Fourth Street. I was starting to feel pretty fatigued, and I couldn't do the math in my head to figure out if I was going to hit 1:45. I just concentrated on hanging on. I had grabbed a packet of Sports Beans about a mile back, and I nibbled on them one by one. Maybe it was all in my head, but it seemed to give me a bit of a boost during that long stretch. There's a big banner hung over the street that can seen for almost a mile in advance, which marks the race split just before Mile 12. I thought I would NEVER get there, but I finally did.

This is the mile where I could feel how beneficial those long tempo runs were. How many times did I hang on for just one more mile? Well, it worked. Knowing I had just a mile to go, I felt better. I was still tired, it still hurt, but I knew I could take it. I knew I would be very close to 1:45. I passed a lot of people.

Mile 13 falls just before the final turn onto Market Street. I made it around the turn, got myself oriented towards the finish about 100 meters away and looked down one last time at my watch. It read 1:44:36. I could do it if I sprinted! I took off like a madwoman. I probably looked pretty silly, like a deranged chicken, but I was at least going in a straight line. I was so tired I was flailing around rather than running, but it got the job done. I threw myself across the line and looked down...1:44:54! I made it! 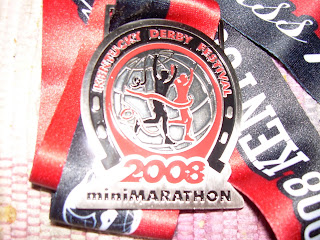 All I can say is, I can't wait to see those finish line photos...they're sure to be a laugh, which would be worth a lot right now...

I really do think this is one of the best, if not the best, race I've ever run. I'm glad I was able to do it for Nana. It might not really help her, but it's the only gesture I know how to make right now.

I met up with Mark back at the car. I was starting to get worried because I had to wait for a while. Here's what happened: he did make it back to the start, but was stuck behind a massive crowd of late-comers and squeezed onto the second-to-last shuttle. He reached the start after the race started, took a quick bathroom break, and started. Yay, timing chips. Stuck as he was behind walkers and slower runners, he had some trouble hitting his pace, but he managed fairly well. He had a tough last 5K and finished in 1:50:49, meeting but not exceeding his goal of 1:50. Still, it was a sizable improvement over his previous best of 2:19!! I am so proud of him. He is already talking about doing another one. :)

Mir,
Perfect description of the race.

The ramps at Churchill are some deceptive lil' buggers. I think it's the degree of incline. You see them and think they're not that long, but then you get on them and seem stuck there forever.

You've got the half nailed for a BQ. Just have to maintain (or, at least, not drop too much) over a second half and Boston here you come. You are in great position. Keep it up.

Wishing you the best for Nana as well.

You did it Miranda out standing and congratulations on making your goal. Great race report.

Congratulations!! You could easily run 1:43 or better on a flat course. Nice work out there- great job staying focused and pushing toward your B goal at the end. I know I've mentioned how similar our racing times are, but this is hilarious- my previous half marathon PR was exactly 1:44:54! :O And I recently reduced that to 1:43:40 so I know you could too. :) Great job Miranda!!

I'm keeping your nana and your family in my prayers, you're so nice to help your family out during this tough time.

What a great race! Congratulations.

Great job on the race! We missed you at the group run this evening, but being with your family is very important. Keeping you and your family in my thoughts.

What a great race report. Congratulations on pushing yourself and hitting your goal time. Well done!